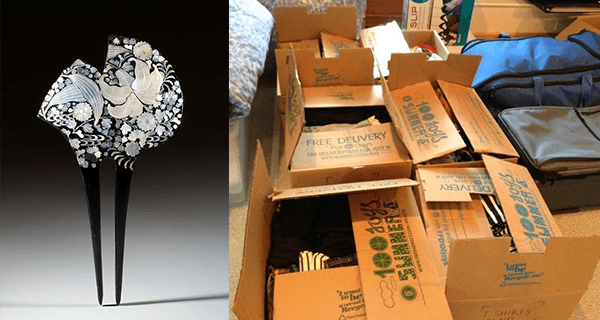 In 1942, 13-year-old Janet Hayashi was abruptly forced to relocate to Salinas, California, where she would spend the next few years living in a World War II internment camp. Of the seven items she was able to bring, her favorite was an ornate mother-of-pearl hair comb given to her by her recently deceased mother, who carried it in her pocket during the long voyage from Japan to the U.S. in 1906. Decades later, the precious family heirloom now resides in any number of boxes labeled “random” within the confines of her granddaughter Beth Shimizu’s Danbury, Connecticut studio.

“Family is super important to us,” the 26-year-old says. “Which is why my mom’s gonna kill me if I lose it.”

Reflecting on the adornment that served as a symbol of hope during her grandmother’s darkest hours, Shimizu says, “The second I opened it at my graduation party, dread swept over me because I just knew I was gonna lose it somehow.”

The search for the item was prompted by the recent engagement of Shimizu’s younger sister, Claire. “I fucking hate my stupid sister right now,” Shimizu says, overwhelmed at the thought of finding the lost antique. “I know the comb is important to my family’s heritage or whatever, but honestly I haven’t even thought about that thing since I moved out of my last apartment,” she says. Downsizing from a two-bedroom railroad in 2013, Shimizu was forced to keep many lesser-used items in the boxes they were stored in, for spatial reasons.

Fortunately, Shimizu’s search eventually ended in success. Stored in one of four boxes simply labeled “random,” the priceless keepsake was found amid a repurposed Celestial Seasonings tea tin—currently storing various thumbtacks—an extra set of shoelaces, six half-filled journals featuring Shimizu’s weekly budgets from May through November of 2011, several SlimLine CD cases, and a bank statement belonging to an ex-boyfriend from four years ago.

“I should probably just throw all this shit out, but there’s always the chance I might need them someday,” explains Shimizu. “Like I probably won’t need a pencil case again, but on the off-chance that I do, it would be crazy to buy a new one.”

Meanwhile the neuter certificate for her labradoodle, Jessica Alpo, remains safely filed away in an accordion folder on her desk.