Man Thankful For Entire Season Of Stuff To Bitch About 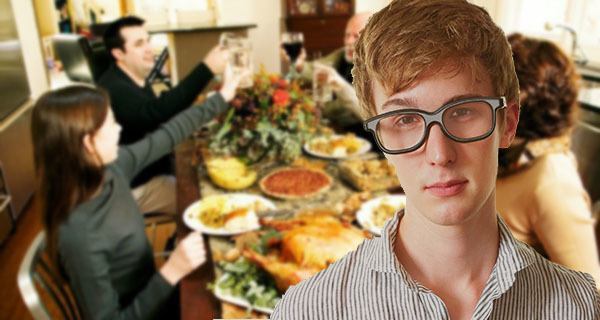 “Let me just quickly explain why you are wrong about everything.”

During the week leading up to Thanksgiving, Rye, New Hampshire resident Matt Kugler, 31, reported that he was feeling especially grateful for being surrounded with what he values most. “There’s no season as rife with stuff for me to suck the ever-living joy out of than the period of time between Thanksgiving and Christmas,” Kugler said.

When asked what he was especially thankful for, Kugler said he was probably most excited to aggressively badger his aging grandmother when she asks the family to say Thanksgiving grace around the table.

“It’s easy to get caught up in all the joy of the holiday season,” Kugler stated. “But it’s important to slow down and appreciate the little things, like the chance to lecture family ad nauseam about the hypocrisy of adopting traditional Judeo-Christian values for only a single night.”

Kugler also noted that he’s very enthusiastic at the prospect of needling his slightly conservative cousin Michelle when it comes time to tell the Thanksgiving story. “Not everyone has a hypocritical cousin they can easily call out on their revisionist bullshit. Whenever she tells her kids to ‘be thankful for what you have,’ I remember how thankful I am for this opportunity to educate all of them about smallpox blankets and the Trail of Tears.”

However, when reached for comment, Kugler’s sister Eliza vocalized her distress. “I’m making a turducken this year for Christmas. Matt doesn’t even know yet. I’m already imagining all the digs he’s going to take at me. Frankly, I’m more stressed out about this than telling the entire family I’m gay.”

Thanksgiving is just the beginning for Kugler. With tears in his eyes, he said, “There are so many less fortunate people out there. Some live in families that don’t refer to their Freshdirect delivery man as ‘the help.’ I’m very fortunate to have at least three Republicans in my extended family to endlessly bitch about.”

Kugler added, “I’m also so blessed to be able to draw attention to myself by reminding people about how the Christians brutally massacred the Pagans. It always puts a real smile on my face.”

When asked about what he’ll focus on after he makes his last quip about the commercialism of New Year’s, he said, “It’s hard when the holiday season is over, but luckily I can harp on global climate change—which is the correct term, by the way—year-round.”