Baby Born On Inauguration Day Crawls Back Into Mother’s Womb 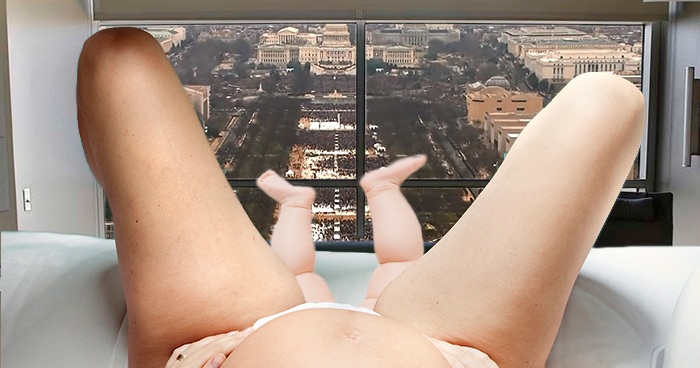 Inauguration day holds a special place in the hearts of Americans, and this years was particularly special for new mother Lauren Davidson. At 11:59 am, Ms. Davidson gave birth to a healthy baby girl at the George Washington University Hospital in downtown Washington DC.

“It was a great delivery,” said her obstetrician, Dr. Ken Armstrong. “There were no complications whatsoever, but things got a little strange afterwards.”

From her hospital room’s window, the baby had a clear view of the National Mall and could see down towards the White House. “I held her up to my chest so that I could see her,” said Ms. Davidson. “But she just turned her head and looked out the window.”

By the time Ms. Davidson held the baby up, it was approximately 12:10 pm, and the inauguration was in full swing.

“The child’s eyes grew large and she displayed what we refer to in the medical community as a ‘deer in the headlights’ expression,” said Dr. Armstrong. “She looked like a Republican senator trying to answer a question based entirely in fact.”

The stress of the inauguration quickly became too much for the newborn who alternated between blankly staring out the window, crying, and laughing hysterically, a motor function infants don’t even possess.

“Normally babies cry because they’re filling their lungs with air,” explained Dr. Armstrong. “This baby however appeared to be crying due to the acute knowledge that she’s totally screwed. I have no clue how, but the baby knew.”

Moments later, the infant grew silent. It was at this moment the baby attempted something that can only be described as a final act of sheer desperation from someone who knows they are totally and utterly fucked.

“She literally crawled back inside me,” said Ms. Davidson. “It was like a rabbit trying to escape into its burrow. She jumped out my my arms and crawled her way back into the womb. The nurses and doctor all tried to grab her but she was incredibly strong for a newborn.”

After a long struggle, the newborn was able to successfully crawl back into her mother’s womb, making her the first newborn in history to do so. “In 30 years I’ve never seen anything like it,” added Dr. Armstrong. “In scientific terms, I would compare it to a fox biting its leg off to escape from a trap. It was actually quite thrilling.”

This act of defiance also made her the first baby to understand the American political landscape.

“I think the thought of having Mike Pence as Vice-President was the motivation she needed to fight her way back inside my wife,” said Jack Davidson, the baby’s father. “She’s clearly going to be a Democrat, if she ever comes back out.”

When asked what she would do about her daughter living inside her, Ms. Davidson said, “I’ll just let her live in there for as long as she wants. It could be any length of time really, but I’d say she’s going to commit to the whole four years. I mean she committed to crawling back in so I’d say she’s in it for the long haul.”