I’m An Adult, So I Won’t Do It. But I’d Like To Punch Barron Trump Right In The Nose 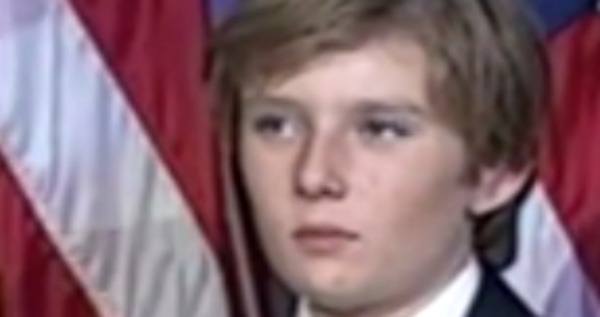 He’s just so punchable. I’d like to sock him one! But… okay, no, it’s not his fault who his dad is. Oh, but you can’t you just tell he’s already turning into such a dick?! His little fancy haircut. Jeez! How old is he? 10? Oh man, I hope some other kid socks him right in the nose. I’m an adult, so I won’t.

I read somewhere that “Little Donald” has his own floor at Trump Tower. His own floor. What a spoiled lad. If I was around his age and size, I’d punch him right in the nose, but alas, I’ll just have to sit here and see if one of his iconoclastic peers decides to stand up, rear back, and take one for the team.

I also read that Barron likes wearing a suit every day, and that he loves playing golf. A suit?! Golf?! When I was his age, I wore sweatpants and played ping-pong in a centipede-infested basement. Oh, if only the timeline had worked out so I could’ve punched that kid in the nose!

It’s not that he did anything in particular, y’know? It’s just that we all need humbling sometimes. We really do. No one should be too big for their britches, no matter who their dad is, know what I mean? I could be wrong, but I just think it might be good for the world if someone (not me, because I’m an adult) gave him a nice hearty punch right in his caviar-moisturized face. Seriously — his face gets moisturized with caviar. Like, someone should punch it, right? One time? I’m not trying to Harrison Bergeron the kid — it’s just that no one should go through life thinking they’re as special as Barron Trump has obviously been taught to feel. Jeez.

Okay, thank you for reading. I’ll go try working out some of my issues now. Like an adult.