Police Cede Some Points To Man Threatening To Jump Off Bridge 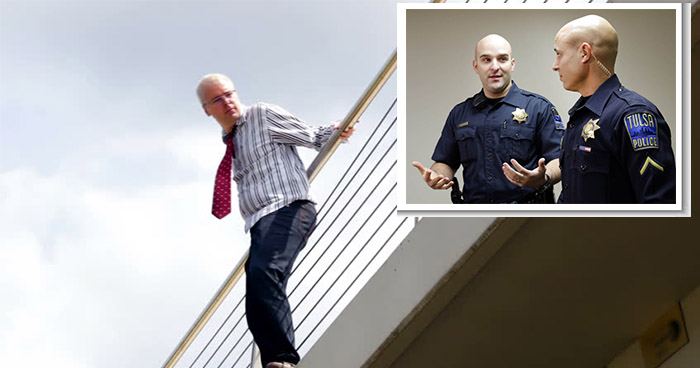 The NYPD was held up for hours in intense negotiations yesterday with a man on the verge of leaping to his death from New York’s George Washington Bridge. Those at the scene report the situation took longer than normal to de-escalate thanks to the compelling, well-articulated pro-suicide arguments the man made to police negotiators.

“I pulled up thinking this would be a routine jumper situation,” said on-duty officer Paul Ramirez. “I opened with the usual ‘you’ve got family that loves you’ thing and he told me his family all died in a plane crash. Man, he got us there. This guy was good. Real good.” Ramirez claims the rescue went well beyond what the academy had trained him for.

“I thought I probably shouldn’t be in charge of this, so I call for backup,” Ramirez added. “When they got here we continued with the whole routine ‘you have so much to live for’ and he said ‘like what?’ and, damn, the boys back at the station never said anything about folks asking questions back at us.”

“When we asked him if he was religious, that’s when it really got interesting,” reported veteran officer Hannah Lewen, who arrived at the scene an hour after the incident began. “He outlined how if there is a God then He has pretty much given up on us. Which, I mean, look at the news. It’s an interesting point.”

Most of the officers present reported learning “several interesting tidbits” about philosophy and world religions during the course of the operation, including that the Bible never specifically prohibits suicide and that “life is suffering” is one of the central tenets of Buddhist belief. Said Lewen, “I really learned a lot from [the man threatening to kill himself].”

Officers tried one last ditch attempt at saving the man’s life by telling him it would get better in the future. The jumper then noted that even if the world turns itself around fast, we’ve already done irreparable damage to the environment, set race relations back forty years, screwed the economy for future generations, and Betty White would probably die any day now. “I gotta be honest,” said Ramirez, “At points, I actually considered climbing up there with him. Just kidding. But no, kind of.”

The situation only resolved itself once discussion shifted away from the metaphysical.

“What got him down was when I asked if he liked any TV shows,” said Officer Ramirez. “It’s so nice to meet another Burn Notice fanatic.” In the end, reports say, police got him away from the ledge with the promise of Ramirez’s HBO Go password.