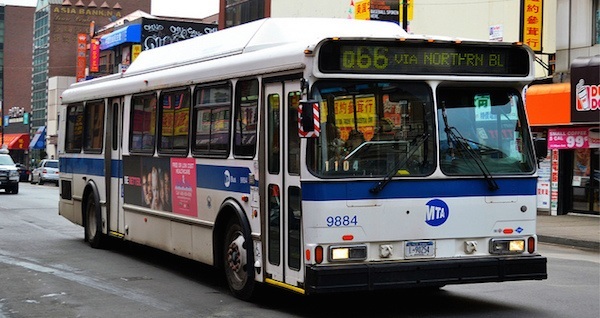 Pictured: The bus. Or one that looks like it. It’s hard to tell. Image Source: Flickr – Photo Sharing!

Andrea Choi, of Flushing, NY, was aboard the crosstown bus on Tuesday when she witnessed an argument between two gentlemen over what she assumed to be an empty seat. “The fight was already pretty well underway by the time I got on the bus, so I can’t be sure how it started,” recalls Choi. With the majority of other passengers already engaged in filming the incident on their phones, Choi was left to put the pieces together on her own. “From the way the one guy kept pointing at an empty seat, screaming, ‘Your fat ass!’ I was able to discern what the argument was about,” nodded Choi.

The two men involved continued to disagree over the course of several minutes, at one point prompting the bus driver to threaten termination of the entire route if neither could sit quietly. Following a momentary detente, however, the men resumed their dispute.

“The guy with the long hair told the guy in the workout clothes to ‘Shut up’,” states Choi. “Then that guy said, ‘Why don’t YOU shut up’, and then they just kept saying that for a good two or three minutes.”

The argument escalated even further when an unidentified woman seated at the rear of the bus got up to intervene. “She just started yelling for everyone to get off the bus,” says Choi. Following several failed attempts to vocally remove everyone from the bus, the woman returned to her seat upon being called “the C-word” by one (or both) of the irate men involved. The defeated woman was believed to have muttered, “Fuck this fucking city,” under her breath, though sources have yet to confirm.

Unfortunately for Choi, she was unable to witness any kind of resolution to the fracas. “After 30 blocks the bus arrived at my stop, so I’m not sure if they ever figured out which one really should have ‘shut up’,” says Choi. “But I’m sure whoever was truly at fault was able to be the bigger person and finally admit it.”