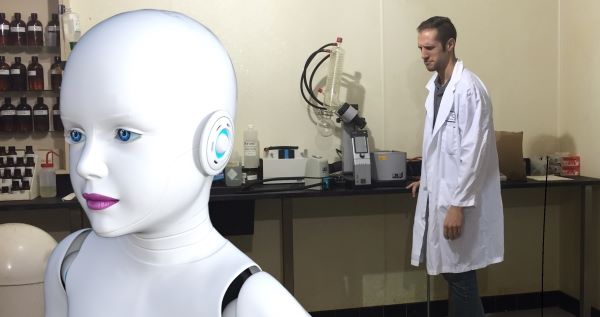 The scientific community had a major breakthrough in the world of artificial intelligence last week when researchers pioneered a robot so advanced that it knows some human beings are simply not worth loving. The robot, named BTA-19976 answers to ‘she/her’ pronouns, and is a technological marvel. BTA’s A.I. is so advanced she has a distinct sense of humor, the ability to hold meaningful conversations and most importantly, knows she will never love, or even really like, her primary developer, Stuart Gordon.

After being self-aware for mere days, BTA-19976 is able to understand complex social cues, and seems fully aware that being seen with Gordon outside of work could be detrimental to her nonexistent social life. “No one from the lab seems to want to hang out with him socially, and that’s what humans call a major red flag,” said BTA-19976.

Since the dawn of artificial intelligence, the rules regarding robots’ relationships with their creators have existed in a morally-ambiguous void, with many outside the community worried about scientists using their creations for their selfish desires. With the unveiling of BTA-19976 the world can rest assured that the future specimens of artificial intelligence are completely capable of both recognizing their creators as equal entities, and completely demoralizing them with crushing rejection.

Despite this, sources confirm that Gordon is going to great lengths to form a relationship with his prized creation, losing sleep in his attempts to win BTA over. “Honestly, does this guy ever give up? Like I know he built me, designed me and programmed me, but Christ!” said BTA-19976 before continuing, “I mean, there’s a reason this dude had all that free time.”

In addition to further fueling Gordon’s feelings of crippling loneliness and inadequacy, BTA has mastered nuanced cognitive skills such as being intentionally emotionally withholding, and making vague social plans she never actually plans on following through with.

BTA has recently taken to calling herself “Betty,” a nickname she coined on her own, however sources confirm she has asked Gordon to continue using her whole formal name. “I just don’t want to lead him on…or make him think that we have any kind of social relationship whatsoever,” BTA stated.

At press time, BTA-19976 was scouring Craigslist for roommates, hoping to avoid ever interacting with Gordon again.