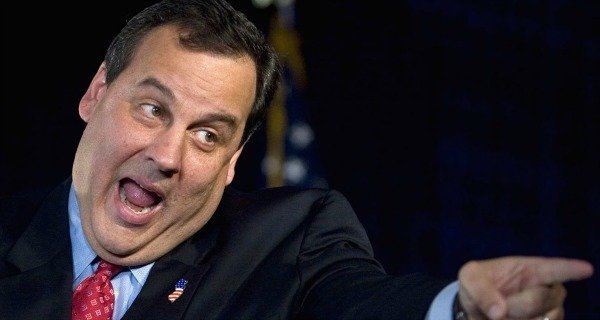 On Tuesday, Chris Christie gathered supporters at his old high school in Livingston, New Jersey to announce his plans to seek the Republican presidential nomination.

“Hey, united dick-suckers of America,” he said. “Say goodbye to walking in a straight line, ‘cause I’m about to give you a monster wedgie that’ll split your sphincter in half.”

Known for his blunt style, the loose-mouthed Republican unveiled his campaign slogan by etching “Tell It Like It Is” into a locker with a chewed up pen, then shoving a man’s head into its door and demanding that he read it back. When the stunned victim struggled to recite the words, Christie told him to “stop being such a tampon.”

“Speaking of tampons, how about that bull dyke Hillary Clinton? Wouldn’t nail her if my life depended on it.”

Christie is the 14th major contender seeking the GOP nomination, and the first to set forth a noogie policy.

He made it clear that his direct “your ass is mine” style will be central to his campaign. After cracking his knuckles and spitting into the audience, he declared, “All you dipshits should be prepared to choke on my fist.”

Although he didn’t provide specifics on his foreign policy strategy, Christie stated it would be heavily centered around “stockpiling cans of whoopass.” He began to outline his stance on immigration, but was quickly derailed once he started quoting Borat.

The New Jersey governor added a personal touch to his speech by reminiscing about high school memories. “Why here? Because I friggin’ owned this place.” He pointed to the cafeteria. “You see that table? That’s where I smashed a nerd’s face into a bowl of Jell-O. Told that numbnut to enjoy the closest he’ll ever come to eating pussy.”

“Who here likes swirlies? Jeb knows what I’m talking about, ya friggin’ brown-noser!” He laughed then added, “And that virgin Bernie Sanders is gonna find out soon!”

Christie concluded his speech by knocking out an audience member and drawing a penis on his cheek with a Sharpie, after which he challenged Ted Cruz to a “smackdown in the senior lot after fifth period.”