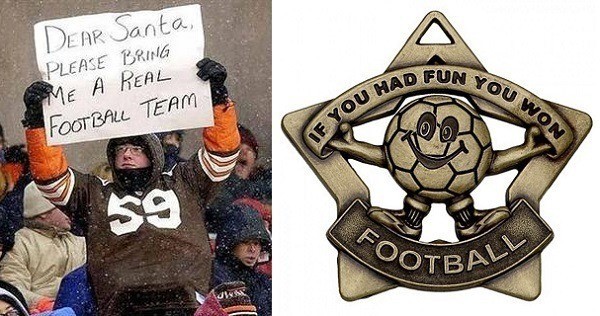 Fans of the Cleveland Browns can rejoice as the team finally has a trophy. Over the weekend, National Football League commissioner Roger Goodell presented the team with a participation award for 2016, even though the season hasn’t started yet.

Taking a cue from elementary schools and youth sports programs across the country, the NFL decided to issue participation trophies to every team in the league — even the Cleveland Browns — regardless of accomplishment.

“The Browns may lack skill, experience, natural talent, intelligent coaching, and component management, but they do have heart.” said Goodell. The trophies, which previously went unused from a 7th grade soccer league, are painted gold with a label that says “If You Had Fun, You Won!”

Browns quarterback Pat Devlin said he is putting the trophy straight on his mantle at home.

“This takes so much pressure off” says Devlin. “Will I be the one to take the Browns to their first Super Bowl? Of course not, but at least I’ll have something to show off when my friends on the Charlotte Bobcats and Detroit Lions come over.”