Woman Looking Forward To Flavors Of Fall, Beautiful Foliage, And An Uprising Of The Proletariat Reminiscent Of The Communist October Revolution 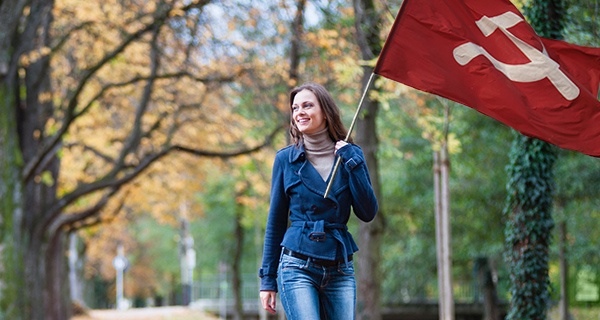 Local woman Anne Marie Jones was overheard at Sunday brunch musing that her “Absolute favorite season” is fall, because she finally gets to pull out those oversized sweaters, consume all things pumpkin spice, and enjoy the crisp feeling of revolution that’s been in the air since October 1917.

For many, fall is a time to recover from the heat of summer while not yet succumbing to the cold of winter. For others, it’s a time to reflect on the Great Socialist Revolution of October and consider a future in which workers forcibly reclaim control of the means of production. At her Radical Socialists for a Global Communist Revolution knitting circle last weekend, Anne and her comrades took up arms against the oncoming chill by knitting scarves and discussing what it would look like if they were to successfully storm the contemporary, U.S. version of the winter palace.

“I think we should mobilize at Frank’s Family Farm next weekend during our apple-picking excursion,” Anne suggested, citing fall as a time in which the seeds of revolution ripen right along with apples and butternut squash.

“I just love fall. I bake more, cozy up next to the fire, drink a union-made pumpkin flavored beer, and think about how a successful mobilization of the working class could lead to an absolute overthrow of tyranny,” She said.

“And capitalism is tyranny, you know.”

Claiming that heat and humidity are the true opiates of the masses, Anne and her fellow Marxist-Leninist idealogues decided that fall really is the appropriate time to mobilize. As the end of summer approaches, so does end of the oppressor’s violent capitalist death grip on the working class, and also wine spritzers.

“It just makes me nostalgic,” she whispered, fiddling with the group’s model guillotine. “I think about the soup my mom used to make, the feel of the cool air as I leapt into a pile of freshly fallen leaves, and the blood of the ruling class rightfully shed as the workers fought to seize means of production and reclaim all that was rightfully theirs.”

As of press time, the group had democratically decided to make a visit to the farmer’s market for apple cinnamon muffins.