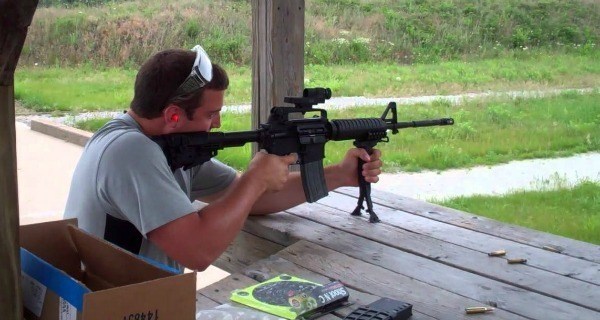 “Are we going to criminalize hunting now???!?” exclaimed the entire NRA on Wednesday night in response to the suggestion of outlawing civilian ownership of the AR-15 assault rifle and other such weapons that have been used to commit mass murders.

“Why, some of my most treasured memories are of going hunting with my pops!” Reminisced the collective 4.5 million gun owners, rarely blinking. “We’d get up early, eat a hearty breakfast of eggs ’n’ grits, grab our rifles, walk into a clearing, and just fucking demolish 103 or 104 deer in less than a minute. They never fucking saw it coming.”

“Suppose that a large-scale terrorist attack and/or a nuclear holocaust wipes out the five branches of the American military, and we get invaded,” continued the mass of gun owners in one, symbiotic, otherworldly voice. “We’d be pretty heavily outnumbered by our enemies, wouldn’t we? Maybe even by a ratio of 103-1.”

“And are we going to say private citizens no longer have the right to protect their FAMILIES???” Griped the throng of millions, speaking like one disembodied Mephistopheles, veins popping out of their foreheads in a heart disease-y type of way. “What happens when 102 or 103 zombies and ghosts descend on my house and I need to protect the purity of my daughters?”

The rising crescendo of voices then collectively opined, “Don’t people know it’s my constitutional right to kill around roughly 105 deer (but slightly less) or 28 bears without even leaving my fucking porch??!?”

They ended the rant by repeating their chorus in a dissident moan, “Guns don’t kill people, and deer, moose, and other small game don’t kill themselves en masse.”