Confederate Statues To Be Replaced With “You Did Your Best, Sport” Participation Trophies 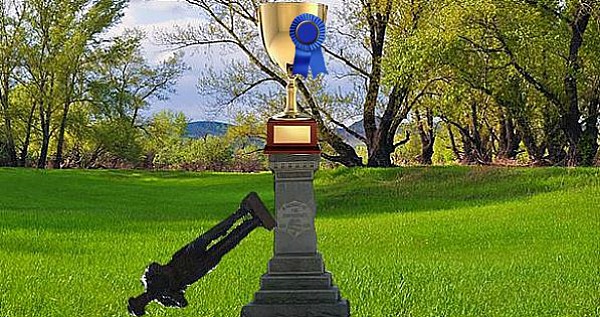 In a rare display of across-the-aisle bipartisan action, Democrats and Republicans have come together to pass a resolution in the House and Senate that addresses the controversy over Confederate statutes.

Under the provisions of the new article, dubbed the “Everybody’s A Winner Bill” by the Washington press corps, all Confederate statues, monuments, and memorials nationwide shall be struck down and replaced with participation trophies.

“While most of us agree that the Confederates were traitors, racists, and big-time losers, they still showed a lot of heart on the battlefield,” declared Senator Chuck Schumer. “When it came to being seditious assholes on the wrong side of history, they did their very best. You have to respect that.”

Prototypes of the 6-foot high participation trophies were unveiled at a press conference on Monday.

“Each of these trophies has been cast in bronze and comes with a really sweet-looking blue ribbon,” said acting White House press secretary Sarah Huckabee Sanders.

“All the plaques carry the same message: You Did Your Best, Sport. Whether we’re commemorating a fallen Confederate soldier or a runaway slave whose name has been lost to the annals of time, they all had one thing in common: they gave it their all.”

The resolution has already started to receive its fair share of criticisms.

“What kind of message does it send to our fellow Americans to give everyone a trophy?,” said Dr. Cornel West. “Winners should get trophies, losers get spit in their eye. These snowflakes need to learn how to take an L.”

For conservative activists lobbying for the preservation of their heritage, the resolution is everything they could have hoped for.

“It’s about acknowledgment, and it’s about respecting the hustle and grit of our forefathers,” said protester Bubba “BBQ” Earle. “They went out there and scraped their knees and bloodied their noses like winners. Who cares if they were fighting for slavery and lost? What’s important is how they played the game, and I think the least we can do is pat them on their ghost shoulders and say, ‘Chin up, champ. We’ll get ’em next time.’”