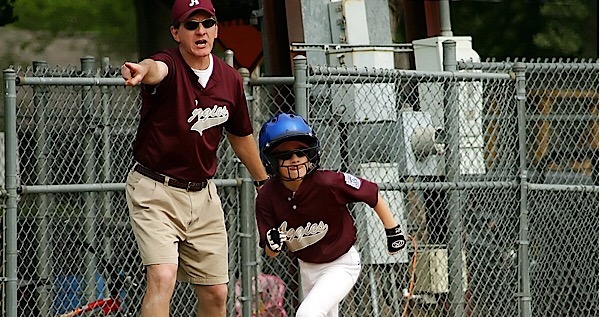 When Mark Davidson brought his son Billy to his first little league game, he had no idea just how much it would bring them together.

Just like any little league game, everyone was there to have fun and learn the fundamentals of good sportsmanship. Which is exactly why Mark knew he had to kick a complete stranger’s ass.

It all started with Billy’s first at-bat during the second inning of a scoreless game. He made contact but was called out sliding into first, an unusual move most coaches would advise against.

That’s when everything changed, and Mark went from simply ‘dad’ to ‘father of the year.’

“I knew my son felt alone out there and someone, anyone, had to pay,” said Davidson. “That ump had it coming,” he continued while reflecting on his carnal desire to kill the volunteer who earlier in the day announced that he ‘hoped all the kids just have a good time.’

But Mark Davidson wasn’t about to let ‘a good time’ come in the way of defending his son’s honor by creating a completely unprovoked scene.

The gold-star parent stormed the field to the terror of all the parents, kids and coaches alike the moment his son was called out and punched the umpire squarely in the nose.

He then continued to belittle the man emotionally while wailing on him physically, hurling such insults as “I bet this is the furthest around the bases you’ve ever gotten” and “I wouldn’t pay you to piss in my toilet,” an epithet that confused everyone within earshot.

“I just want to be a good role model for my son, my dad wasn’t really there for me so I need to make sure I take any opportunity to violently overreact in front of my children,” said Davidson, while his son cried in the dugout as the police came.

If only there were more dads like Mark, the world would be a better place.

While Mark is currently incarcerated for aggravated assault, he knows he did the right thing, “I just want my son to know I’ll always be there for him, and when I get out of here in 3-5 years, he’ll know.”