Dog’s Weird, Oversized Nipples All Anyone At Dinner Party Can Focus On 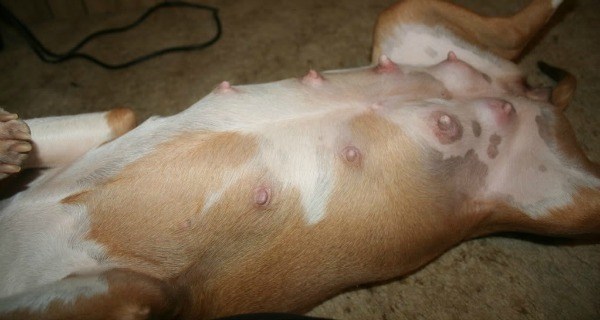 A Los Angeles couple hosted a small housewarming party last Friday evening, inviting neighbors over for a casual meet and greet in their newly acquired Crenshaw home. Also present was the pair’s eight-year-old Pit Bull Terrier, Peanut, whose weird, oversized nipples would hijack partygoers’ attention for the majority of the night.

The party, hosted by newly relocated Sami and Jonathan Kim, featured a wide variety of catered dishes, Northern California wines, and Mrs. Kim’s famous key lime squares. Although technically a success, most guests were only able to recall one specific detail of the evening, which unfortunately had nothing to do with the Kims’ 13 consecutive hours of preparation.

“Those two seem really cool, but what the hell was up with that dog?” asked guest Mia Santana. “I really tried not to stare, but somehow they just always seemed to be lingering right in my peripheral vision.”

Peanut, who had several litters of puppies before being adopted by the Kims three years ago, seemed to lack any awareness of her super-gigantic nipples, at times almost seeming to flaunt them in front of well-meaning, but horrified, strangers.

“I think everyone tried to pretend they weren’t there, but Peanut kept rolling over on her back, just kind of pointing them right up at you,” said neighbor Michelle Robb. “I know she wants you to rub her belly but it’s like, how do I even do this, logistically? It also would’ve been bizarrely sexual.”

Robb eventually decided to use her index finger to scratch a small stripe of Peanut’s belly, on which no dangly, deflated nipples were present.

“The Kims seemed so nice, and I guess Sami works really close to my office downtown, but honestly, it was hard to focus on what anyone was saying,” recalled guest Darren Roberts. “I don’t know. It took everything in my body to focus on maintaining eye contact and not staring at those Goddamned freakish dog nipples.”

“Listen, we know everyone is weirded out by the nips, but what the hell are we supposed to do?” Mrs. Kim said. “The easiest thing is for everyone to just pretend they aren’t right there, the same way we all do with her enlarged, floppity, Hershey’s Kiss-looking vagina.”

Peanut’s comically large nipples would eventually redeem themselves as the evening drew to a close, serving as a topic of conversation after a few glasses of wine rendered guests completely unable to hold back on publicly acknowledging them any longer.

“I actually announced that I was pregnant,” Mrs. Kim said, “but everyone was so wrapped up in Peanut’s monster teats, I don’t think anyone heard. And I really can’t blame them.”