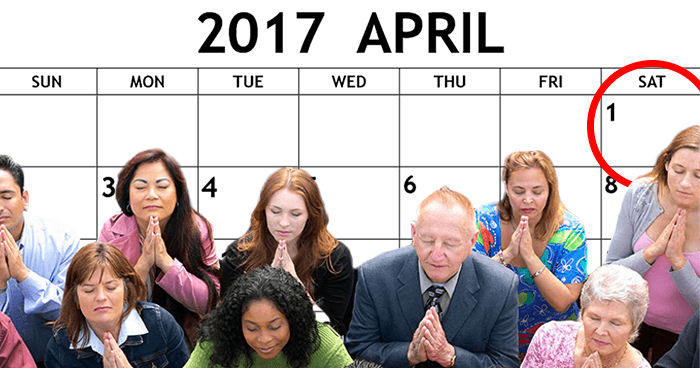 April 1st, otherwise known as “April Fools’ Day,” has long been a time for pranks and hoaxes – but this year for the millions of Americans still in disbelief over the events of the last few months, it is also a day of hope.

“I pray every night that on April 1st, Ashton Kutcher is going to crash one of Sean Spicer’s press briefings and explain that the whole Trump Presidency was just a bit for his new Punk’d reboot,” said Utah father of three Dennis Bickford. “Until then I’ve got my fingers and toes crossed. Hell, I might even cross dicks with my best friend James…you know, just to be on the safe side.”

Dennis is far from the only one crossing appendages and hoping that the results of the 2016 election end up being nothing more than a misguided prank. New York City resident Rachel Feinberg also hopes desperately that this year’s April Fools’ Day will expose Donald Trump’s ascendancy as nothing more than a clever ruse.

“You watch, on April 1st Trump is gonna send out a tweet with just one word, ‘PSYCHE!’ and we’re all gonna have a good laugh!” said Feinberg as her nervous laughter slowly turned to quiet sobbing. “It’s either that or I take a handful of Tylenol PM and wash it down with some rubbing alcohol. Either way, the nightmare will finally be over.”

Vermont native Jeremy Slater takes it a step further by imagining an April Fools scenario straight out of Scooby Doo.

“Trump is going to rip off his mask and reveal that he’s been Bernie Sanders the whole time!” said Slater enthusiastically. “Then old man Sanders is gonna yell ‘Gotcha!’ and unveil a new single payer health care system!”

Though many voters want President Trump to be this year’s April fool, there is one person who wants it even more than most, former Secretary of State Hillary Clinton.

Clinton made an allusion to Trump leaving the oval office in a tweet aimed directly at the commander in chief that was sent out this morning., writing, “Hey, @realDonaldTrump, do they have April Fools day in Russia? No, but seriously, thanks for keeping my seat warm for me…APRIL FOOLS!”

When asked what would happen if April Fools day comes and goes with no such revelation, many citizens agreed, saying, “I guess we’ll just have to hope this is the series finale of Lost in a parallel universe or something.”