Trump Says He Would Have Risen “From That Cave In Two Days, Tops” In Easter Speech 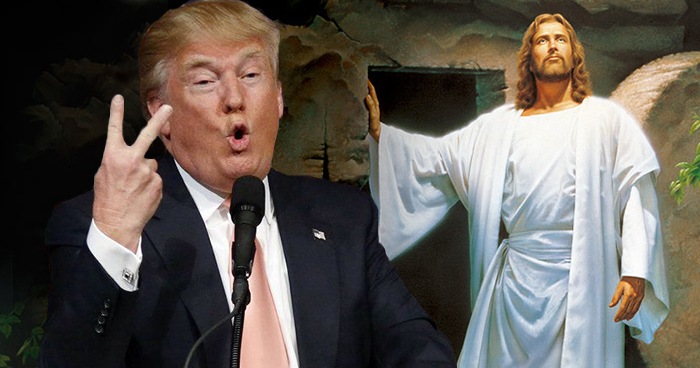 At a recent rally in Apache Junction, Arizona, President Trump delivered a speech on the subject of Easter, and declared that if he were faced with the same treatment as the Son of God, he would have risen “from that cave in two days, tops.”

The President was, of course, referring to the tomb in which the Prince of Peace was laid to rest, only to miraculously rise from it three days later, according to scripture.

“Three days? Really? Why the hold-up? That’s what I wanna know,” the 45th President of the United States said to a cheering crowd. “If that was me… oh boy, folks. Let me tell you. I’d be out and back to work so fast your head would spin, and doing marvelous things. Fantastic things.”

The President seemed unimpressed with Christ on every level, even going so far as to say His crucifixion was a result of His own inability to lead.

“I like the Messiahs who don’t get nailed to a cross at thirty-three, OK?” Trump boasted. “Not a great leader. Sorry folks. Don’t get me started on the whole ‘Cleansing of the Temple’ thing, by the way. Pure socialist, anti-business garbage. Very unfair. And not nice.”

“And let me ask you this, folks,” Trump continued. “We’ve been hearing a lot of His ‘return’ for awhile now. So here’s my question: where is He?” The President then pretended to look through the crowd, behind him, and under his podium in an exaggerated fashion that had the crowd laughing and applauding wildly. “Anyone seen this guy? Hello, Jesus? Are you here?”

At that point the President unveiled a golden statue in his own likeness as his supporters danced and howled wildly.

“Isn’t this the classiest thing you’ve ever seen? I mean really. Solid, real gold. Nothing false about it,” said Trump, his arms raised high as the crowd chanted his name. “And it’s here. Right here, in front of your very eyes. Unlike some Messiahs I could mention, but I won’t, because I’m a nice guy. Probably the best.”

“So Happy Easter,” he concluded. “Even to the haters and losers.”