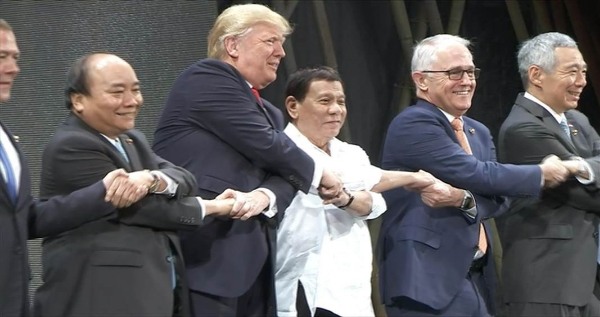 President Trump spoke to the press yesterday for the first time since returning to the United States from a whirlwind tour of Asia, a tour during which the president insists he only used offensive language a handful of times.

“To tell you the truth,” Trump declared with pride, “I only said Oriental 5 – maybe 5-and-a-half – times the whole trip!”

“The first time wasn’t my fault,” explained the president when describing the circumstances that prompted him to utter the problematic term. “Nobody told me before the trip that those people don’t use that word that anymore. We had just sat down to dinner with Emperor Shinzo Abe of Japan and when I saw all the food he set out, I said — I thought very positively actually — ‘Gee, you Orientals put out quite the spread!’ If you ask me that one shouldn’t even count.”

“The second time,” Trump continued, “was at the same dinner after I had a few too many sakes.” “I asked Emperor Abe if it was true that Orientals had small wing-wangs,” confessed Trump. “That one just kinda slipped out.”

Trump next used the word while discussing Kim Jong Il with South Korean president Moon Jae-in, however the president insists that he used the word to cover for a much worse slur.

“The fourth time was funny,” chuckled the President. “I was in China and I asked President Xi ‘Hey, what do you call a Japanese toupee?’ Before he could answer I blurted out ‘An Oriental rug!’ I don’t think he got it but it sure cracked me the hell up. That one was totally worth it!”

The commander-in-chief revealed that the fifth and final time he used the outdated expression was when he asked President Duterte of the Philippines if Filipinos were “still technically considered Orientals”, a question he admitted he should have asked before he left.

“The Philippines confused me because they look a little different than all the other guys,” said Trump. “How can I ask the guy about human rights when I’m not even sure if I’m on the right island?”

“But yeah,” the president continued, “I probably should have Binged that before the trip. That one was on me.”

The president expressed no remorse for using the borderline racist slur and in fact considered it a victory he had said nothing worse during the twelve days he spent in Asia.

“I think I showed great restraint,” said Trump, “I didn’t say ‘ching-chong’ or ‘me Chinese, me so dumb’, I didn’t even make any jokes about eating dogs and cats, and trust me, I really wanted to. All things considered I think the trip went pretty well.”

The president closed out the press conference by remarking, “Believe me, I could have treated those Orientals much worse!” before muttering sheepishly, “Oops, better make that six!”