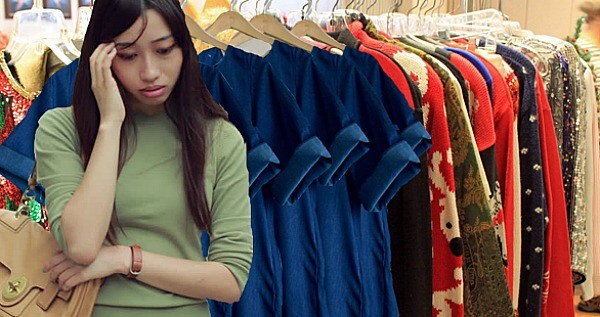 After discovering eleven identical copies of a bizarre dress at a local thrift store, Phoenix resident Heather Rollins deduced that the only possible explanation for them must be that they were donated by some sort of failed local cult.

“Yup, eleven,” Rollins told reporters after counting again just to make sure. “They all have this Wednesday Addams-meets-Zooey Deschanel thing, which I like, don’t get me wrong. I would totally buy one but I just feel like some sick stuff might have happened while these dresses were being worn. I don’t even want to let my imagination go there, to be honest.”

“Like, it is weird that there’s so many, right?,” she added.

Rollins’ suspicions arose yet again after noticing the same emblem on the right shoulder of each dress.

“Look at that! This one has it too,” she exclaimed. “It’s like, two guys holding up the sun, but the sun has an eye in it? Or is that a sideways banana? I don’t know dude, this is so creepy.”

Settled on the fact that the dresses were worn as uniforms, Rollins still struggled to explain the nature of the cult, as well as its reasons for folding.

“Can a cult even do that? Can they just go under and wrap it up? Don’t they usually just kill themselves all at once?,” the 24-year-old graphic designer asked. “Oh God, what if all the girls who wore this actually killed themselves? What if these are all the dresses of dead girls? I bet you that’s what happened.”

After asking clerk Shawna Belvedere if she remembered who dropped off the dresses, Belvedere informed Rollins that, to the best of her recollection, it was “some tall white guy with a long beard and aviator glasses.” As the clerk walked away, Rollins looked at reporters and mouthed the words “HOLY SHIT” in an exaggerated manner.

“Fuck it, I’m buying one,” she later said, after a long, thoughtful pause. “At the very least, it’s worth it for the story.”

At press time, Rollins was wearing the dress at a local Safeway, where she found herself in an eerie encounter with a frail, quiet woman in the produce section who addressed Rollins only as, “Sister?”