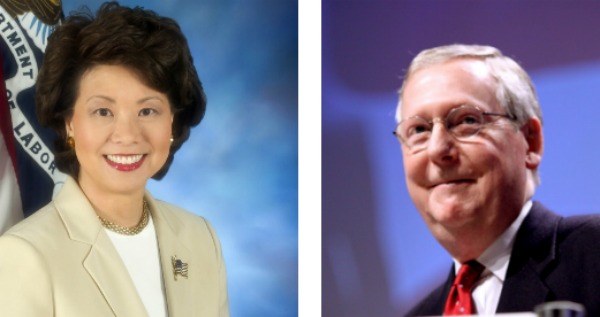 I don’t want to imagine it, but now that I’ve thought of it once, I can’t get it out of my head. Do you think she heads down there? Yuck.

They are married, after all. It’d be much weirder if they didn’t engage in some kind of consensual sex. But in terms of the details of that consensual sex…do we think it includes oral? Specifically Elaine performing it on Mitch? I would have to assume he’s not going down on her — he doesn’t seem like a very generous guy, or respectful of women’s needs.

By no means do I want to make light of the sex lives of government officials. But ever since the question came up, I can’t stop pondering it. Do you think Elaine Chou sensually takes Mitch McConnell’s undoubtedly abnormal penis in her mouth, then lovingly sucks on it until he reaches climax?

As many of us know, oral sex is fun, intimate, and gratifying on both ends. It is pretty much universally agreed upon as a rockin’ thing. But imagining Elaine and Old Mitch getting into it… I dunno. Unsettling at best. It’s kind of like picturing your parents doing it, if you thought your parents represented all that is wrong with our country. Maybe you do. I don’t know your parents.

So many things to wonder about! Is his dick is as strange-looking as his neck? When he gets scared, does his penis retract into his body like a turtle into its shell? Do they have, like, sexy names they call each other? Fetishes? Role-playing stuff? If she blows him, does she touch herself while she does it? Do they make eye contact during the act? Does she swallow? Do they kiss right afterwards? Does he say “thank you”?

These are the questions that won’t let me sleep.