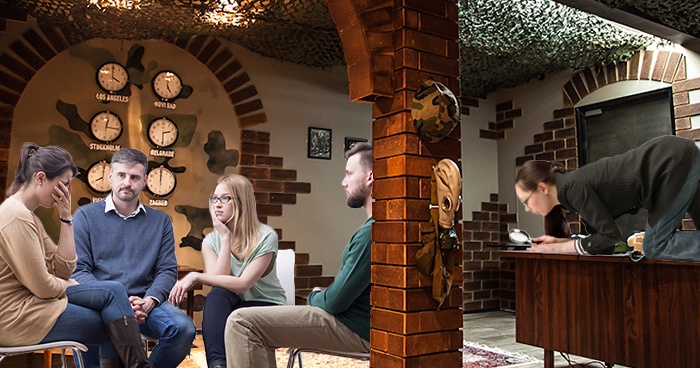 Praised for its grim atmosphere and brutally hard puzzles, The Puzzle Prison is Tucson’s premier escape room. Since it’s opening three years ago, it’s been a big hit with locals like 34-year office worker Vanessa DeWitt, who recently attended the escape room with ten of her closest friends and family.

“I really dug the creepy Victorian prison aesthetic,” DeWitt said. “There was so much going on in that dark room – we had to exhume and reconstruct skeletons, decipher strange codes chiseled into the prison bars, and even carve a key-shank out of a bar of soap.”

DeWitt admits that the most challenging portion of the escape room was sitting through a three-hour intervention held by the rest of her group.

“Yeah, I like to eat fistfuls of Valium like they’re M&Ms,” she said. “But I don’t see what that has to do with us escaping from Fiendish Inspector Sinister’s Hell Cell.”

“We tried doing an intervention at home back in July, but Van just slid out the doggie door,” he said. “This whole escape room excursion was an excuse to keep her in one place long enough for her to hear the truth about her problem.”

While she considers the intervention to be thematically inappropriate, DeWitt appreciates how it challenged her.

“It was the hardest puzzle to crack,” she said. “When my sister started crying and talking about the time she found me passed out in her bathroom, I couldn’t figure out what that had to do with unlocking Sergeant Sin’s evidence locker.”

It was DeWitt’s talent for pattern recognition – ironically a skill that doesn’t apply to recognizing the pattern of addiction and devastation in her real life – that finally allowed her to crack the code.

“When my ex called me out for stealing $5,000 from him, I realized that was four digits – just the combo I needed to open the tumblers on my ankle shackle,” DeWitt said. “And when my boss gave me a card to a rehab center he went to, it was the perfect size to slide through the lock on the cell door.”

Fired up from her experience at The Puzzle Prison, DeWitt is eager to go through other escape rooms in the future.

“My dad said he’s taking me to a huge escape room in Florence next week,” she said. “It’s called Gentle Recoveries. It’s supposed to have tall fences, guard dogs, and lock-in evening curfews. I can’t wait to escape from that place.”