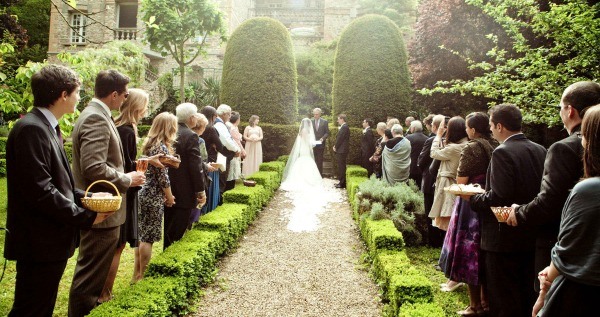 Last weekend, on a lovely summer day in Montauk (not too windy, not too hot) an extremely insecure couple forced over 100 friends and family to just sit there and watch as they told each other that they’d like to spend the rest of their lives together.

Jenna Roberts, 29 and Quincy Farnsworth, 31, both residing in Brooklyn, NY, reportedly spent at least $120 per guest on food and drink alone. Being both in love and at about that age where most people usually do this sort of thing, they just figured it was about time, they guess.

For the mid-afternoon ceremony, the bride wore a beautiful white dress that cost several weeks’ salary, and the groom wore a rented tuxedo that cost about $200. Their closest friends (excluding those of the opposite gender) all dressed identically and stood nearby them, but lower down and kind of off to the side.

Roberts’s and Farnsworth’s parents flew into town from Northern California and Orlando, respectively, to witness the nuptials, and were seated in the front row of the audience, occasionally crying and somehow making this whole thing about them too, sort of. To add legitimacy to the event, a religious official presided over the ceremony.

To assuage the couple’s insecurity, all of their friends brought them presents, most of which were chosen from a pre-determined list set by the very people who invited them there in the first place.

At the reception, covers of popular songs were played by talented musicians with dreams of a better, more exciting life. Most people danced. Even the babies! Several people made jokes about getting a second piece of cake.

Unsure of when they ought to kiss each other, Roberts and Farnsworth distributed small bells to their approximately 115 guests, with instructions to ring them at any point — an aural cue for the giant babies who need their hand held through every little thing, to connect mouths.

Will this day bring them emotional security in the long run? Only Tim will tell. Tim is their marriage counselor, and he’ll break his confidentiality agreement if I give him some weed.