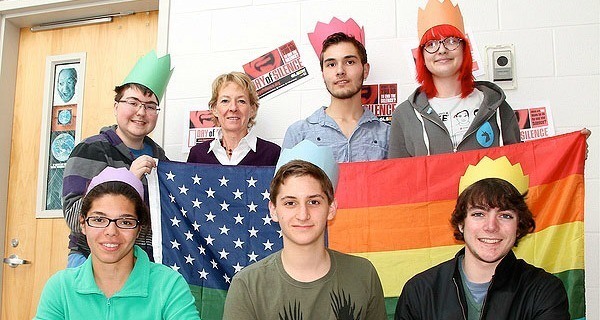 To celebrate National Coming Out Week, the Marblehead High School Gay-Straight Alliance bravely announced this week that they’re seeking to add an actual gay student to their club roster.

President of the club Ashlee Gibson reveled her plans on Monday to “diversify the perspective of the GSA and include at least one real, live gay voice.”

Gibson routinely maintains that her enthusiasm for the GSA has always been “way more than just an extracurricular activity on college apps,” but sources confirm she dedicated her admissions essay to the issue, as well as seven out of ten of the short answer questions on the Common Application. When pressed on the matter, she clarified, “I’m 110%, totally, definitely straight, like a negative six on the Kinsey scale. I mean, I’m a proud ally, but just want to make sure people know I’m not gay, not that there’s anything wrong with it. I’m just not.”

While they declined to comment on their leader’s intentions, the seven-member club noted that they had already identified a few potential recruits.

Treasurer Emmie Webb has her eye on Junior Class President Christina Diaz, who has been openly gay since sophomore year. “She would just be a huge get for us,” Webb mused wistfully while perusing the woodshop attendance roster for potential female candidates.

When asked whether she’d consider joining, Diaz stated, “I play three varsity sports, manage our newspaper, and just started hooking up with a senior. My plate is just too full right now. Plus it’s way more fun to see what stuff the straight kids think we’re all into at their club events.”

She says she is especially looking forward to their “Flannel Fiesta” next week.

Sophomore Sophie Dixon’s first pick, however, is budding freshman theater star Max Armstrong. Said Dixon, “He’s a really lovely soprano with a keen eye for fashion and a kind-of floaty walk.” Dixon also noted that she is in dire need of the “perfect gay BFF” to accompany her on her homecoming dress shopping forays.

Armstrong still identifies as straight, but Dixon has not let that discourage her. “Speaking for all the gay people in our school would just be a super amazing way for a 14-year-old to come to terms with his sexuality, and if someone needs to drag him out of the closet, I’m happy to be that someone.”

Openly gay club faculty advisor Mr. Rhodes couldn’t be reached for comment because he was too busy “writing college recs for all the GSA members” until sometime late January.