Hey Guys, Fahrenheit 451 Is Good Too You Know, Just Saying… 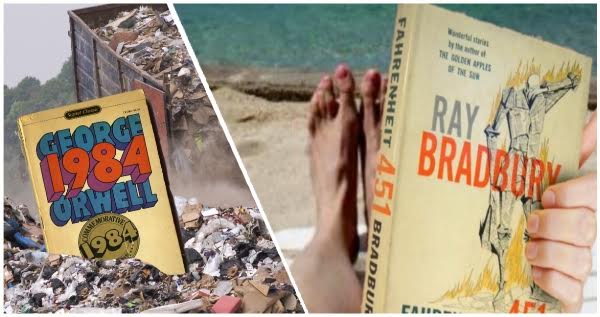 Thanks to Colonel Combover and his gang fucking shit up on a daily basis, every doomsayer’s literary wet dream 1984 has made its way back onto bestseller lists everywhere. Meanwhile, the criminally underrated Fahrenheit 451 is getting left behind. As Señor Small hands himself would say, “Sad.”

As cool as it is that everyone suddenly gives a shit about a book they haven’t actually read since tenth grade, could we all stop riding George Orwell’s dick every time the government does something scary and give another depressing work of speculative fiction a chance for once? Fahrenheit 451 is just as bleak as 1984 but with less gross varicose ulcers and more arm mounted flamethrowers, what more could you ask for from a dystopian novel?

Look, I get it, 1984 feels super relevant right now with all of these “alternative facts” floating around Washington and that line about “The Party told you to reject the evidence of your eyes and ears…” popping up in your Facebook feed like ten times a day, but that shit is selling out on Amazon faster than you can say 2+2=5. Sure, you could go digital but there’s something that feels kind of ironic about reading a book thats most famous line is “Big Brother is watching you” on a shiny glass screen where there’s a good chance that Big Brother is, in fact, watching you.

Instead of making the physically demanding trek to a brick and mortar bookstore – if you can even find one that’s still open – just throw Fahrenheit 451 into your virtual cart and in three to five days you’ll have all of the social and political relevance that you crave – wall-sized TVs, a society destroyed by political correctness, etc. – with none of the pesky out-of-stockness that is currently plaguing Ol’ Georgie Porgy’s apocalyptic snore-fest.

That’s right, I said it: 1984 is boring as shit. What do you expect, the brits are dryer than a mummified saltine dunked in sand. Ray Bradbury, on the other hand, paints his dystopian landscape with vivid descriptions using such lush prose that by the second chapter you’ll be creaming your jeans so hard you’ll wish you’d put a towel on the sofa before you sat down.

If that hasn’t gotten your dick hard and your ovaries poppin’, Fahrenheit 451 also features a robot dog that murders people with a needle full of poison. How fucking cool is that?!? 1984 has neither robot dogs nor poison needles; I rest my case.

I don’t hate George Orwell or anything – shit, Animal Farm was my jam back in Highschool – it’s just that 1984 is so played out that it’s become The Beatles of cautionary sci-fi novels: You get why your parents like it but it’s just so mainstream. Fahrenheit 451, on the other hand, is like the Sex Pistols piercing your brain with a safety pin made of truth and also poison.

Let’s be honest, the next time you experience feelings of frustration and hopelessness when confronted with the very real possibility that our government is quickly becoming a fascist regime, You’ll probably just go watch V For Vendetta again. But on the off chance that this time you’re really going to stick to your New Year’s resolution to read more, do yourself a favor, skip the book all of the cool kids are reading, and pick up the slightly less well known but arguably more kick-ass Fahrenheit 451. I promise you won’t regret it.