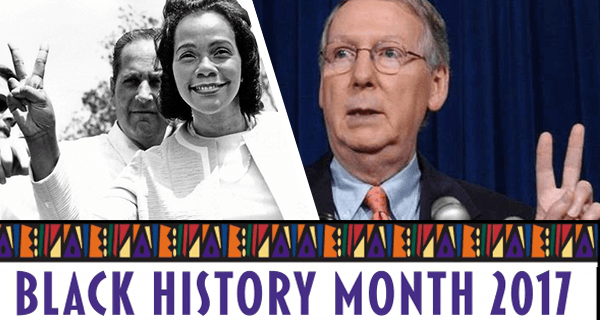 In a heated exchange on the Senate floor late Tuesday night, majority leader Mitch McConnell silenced fellow senator Elizabeth Warren from continuing to read a letter penned by Coretta Scott King. The letter – written in 1986 – condemned Senator Jeff Sessions’ civil rights track record, and suggested he was unfit to lead as a district court judge in Alabama at the time.

McConnell and the rest of the house majority chose to prevent Warren from continuing to read the words of a revered civil rights activist who once said, “Struggle is a never ending process. Freedom is never really won, you earn it and win it in every generation.”

“It won’t be this generation!” McConnell commented when the session had ended. “As Americans, we all need to do our part to recognize Black history, especially this month – which is why I’m doing everything in my power to repeat it.”

Speaking on behalf of the rest of the congressional majority, McConnell went on to say “Jeff Sessions is a man with a consistent and celebrated past of sponsoring legislation that suppresses, targets, and disenfranchises the Blacks. What better way to honor their struggle than by continuing to perpetuate it?”

Sessions, who once said he thought the KKK was “ok, until [he] learned they smoked marijuana,” is adamant he has since changed his mind, proving progress does eventually march forward. “I think marijuana is alright now, too” he clarified.

McConnell, for his part, has promised to do everything in his power to continue honoring Black Americans by oppressing them in “The storied tradition of this great nation.”

“Silencing the words of a passionate Black activist in the most influential chambers of democracy feels pretty consistent with much of the black experience in this country, no?” Asked McConnell. “It’s important that we never forget where we came from, which is why I’m doing my absolute best to recreate the experience.”

Sessions and McConnell have both vowed to do everything in their power to repeat history in honor of Black people everywhere.

“Betsy Devos’ appointment may end up being our greatest contribution to Black history month,” said McConnell. “If she can completely gut the efficacy and resources of our most vulnerable schools in minority areas, perhaps we could end up seeing segregation again in our lifetime. The liberals are always harping on about ‘lack of learning by doing in the classroom’ – I ask you, is it truly more effective for students to learn about civil rights at their desks, or by experiencing what if feels like not to have them firsthand?”

For his part, Sessions commented, “Everyone seems sweet on Orwell right now, so in his own words, ‘the most effective way to destroy people is to deny and obliterate their own understanding of their history.’ I think we’ve proved we’re not some evil Orwellian government with this vote – how could we possibly be obliterating history when we’re so committed to repeating it?”