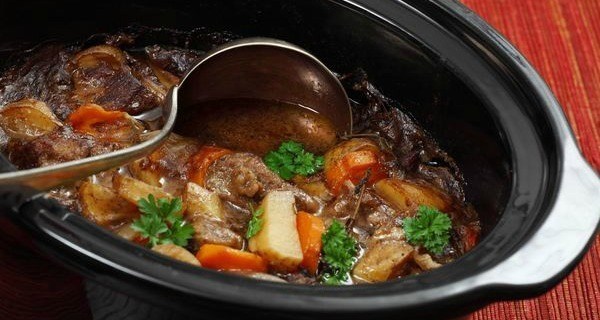 As the days get shorter and the nights get cooler, many reach to their trusty Crock-Pots to keep their bellies warm and their homes smelling of a hearty, homemade meal. After you’ve enjoyed a warm bowl of slow-cooked goodness, you’ll probably place any one of these recipes in your refrigerator “for later,” where they will promptly be one hundred percent forgotten until you decide to use your Crock-Pot again.

Check out any of these tasty recipes that might be under that layer of mold in the back of your own refrigerator!

Now just mostly a vat of sludgy green mush, the use of red onion in this classic, hearty recipe will become apparent the moment you open the lid and release some aggressive fumes that could technically be labeled as a biohazard.

The Creole term “jambalaya” translates (loosely) to “a whole bunch of random shit,” which is exactly what this mistake will closely resemble by now. At least you have that giant bottle of cumin to last you the rest of your life.

You can’t look at a list of Crock-Pot recipes without seeing your fair share of stews! Upon unearthing the radioactive nightmare that this spicy, salsa-infused dish has become, you may wonder if you’ve discovered an entirely new color making its debut on the spectrum of visible light.

Aging much better than some of its Crock-Pot brethren, this Asian-inspired dish looks and smells pretty much exactly as it did when first created, which is to say, an inedible.

Smelling exactly as you’d think “month old cow” would, it’s actually best to just throw the entire Crock-Pot in the garbage with this one! At least you can impress friends with your “Matt’s Famous ‘$36 Bowl of Chili You Eat 8% Of” recipe.

This sweet treat may be hard to identify at first, as apples are not “generally” blue and fuzzy, but the rancid smell of fermenting apples will remind you never to search Pinterest for recipes ever again.

This expired party pleaser isn’t too far of a cry from its first iteration, since bleu cheese is literally mold. However, it’s current state will have you wondering, “Is there such a thing as super mold?”

Currently appearing to be a large container of pinkish gruel, this dish, once ripe with Latin flavor, has slowly but surely begun to decompose with each passing moment. Maybe if you just shove it to the back and pretend to forget about it again, it will eat the Crock-Pot itself and save you three weeks of “letting it soak” in the sink.