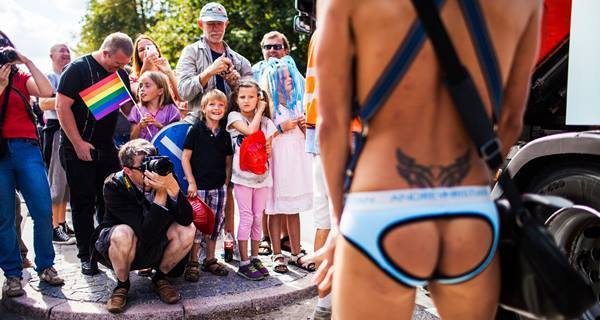 Abiding by executive orders from Barack Obama’s Gay Czar Anthony Kennedy, families were targeted and brutalized in cities across the United States during annual gay pride parades. In an order released following the Supreme Courts ruling on gay marriage, Kennedy requested that ‘homosexuals and others shall and must terrorize traditional families to wash away time-honored American institutions.’

In the Chelsea district of New York, roadblocks were set up to catch ‘straighties’ and other enemies of the homosexual agenda. After being undressed and re-adorned with thongs and nipple tassels, families were then separated and forced to march the length of the parade while singing the entirety of Lady Gaga’s album Born This Way.

In Chicago, families were forced to run a gauntlet of depraved acts along the parade route. At one stop, veterans were stripped of their uniforms and made to stomp on the American flag with semen-drenched feet.

At another, teenagers wore virtual reality goggles that simulated a bathroom at a gay club at 4:30 AM. A previously heterosexual football player named Xavier told reporters that he couldn’t wait to experience his first glory hole after taking the virtual reality tour. 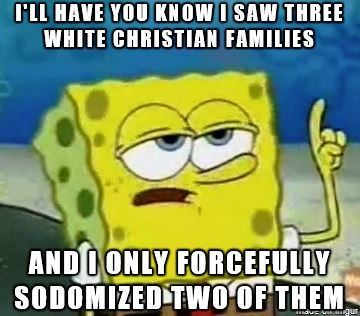 A may-may shared on a cork board frequented by homosexuals.

Joe Biden declared the weekend a complete success, noting that he had personally emptied several used condoms into a Bible while he was ‘getting loose’ at the Washington Monument. On a dare, Michael Moore then ate the Bible in its entirety.

The effects on American society were deep and immediate. As of this writing, 87% of Americans now identify as gay while only 2% of the population knew who Walter Payton was.