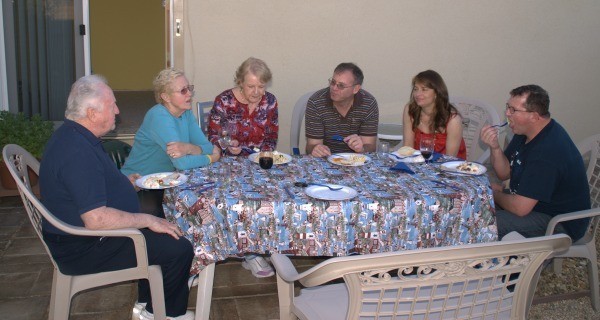 In the midst of one of the most contentious election cycles to date, the combination of social media and outspoken political candidates has created a shitstorm of tension, arguments, and general awkwardness on Facebook. While feuding with your bigoted high school acquaintance may have become the norm at this point, by now you’ve inevitably been put in the position of arguing with your less savory and surprisingly racist relatives, too! Here are six handy tips to help you figure out how to ease the tension at the next family reunion, most of which will leave you alive.

Make a show of affection when you see each other.

Even though it might be tempting to give your cousin the cold shoulder for writing “Even my black friends hate black people right now” on Facebook, you can’t spend all three days of the long weekend ignoring him. Break the ice with a show of affection, like grabbing his ass or flashing him. This should completely divert attention away from your heated Rand Paul Internet spat and towards the calmer waters of incestuous flirting.

Change the topic if politics come up.

Sure, you and your uncle disagree about Hillary Clinton, in that he’s called her a “frigid cunt” on more than one occasion, and you hope he dies. But this is the man who took you camping every summer as a child, so it’s best to put your opinions aside for one family brunch and take the high road. If politics come up, just change the subject! For any gay people who haven’t come out yet, this is an excellent time to bring that up. It’ll be a little trickier if you’re straight, but an unplanned pregnancy (fabricated or otherwise) should draw the conversation away from Universal Healthcare in no time.

If the ball is rolling too quickly down the hill and you just can’t stop your aunt from launching into an impassioned speech about the war on religion, the situation may call for drastic measures, which is why you should keep matches and a small container of lighter fluid in your pocket just in case. When the conversation has reached a breaking point, pour the entire can over your head and light yourself on fire. For the faint of heart, just hold your breath until you pass out. Either option works—it just depends on whether you’re trying to escape this particular conversation, or all future ones as well.

Surely, you and your grandfather can put politics aside in the interest of discussing other loved ones! Pick the relative you know is doing the worst, and feign concern. Grandma’s emphysema rendering breathing incredibly difficult? Deadbeat cousin in jail for possession of methamphetamine again? If grandpa is crying, he’s not talking Ted Cruz!

Sometimes you gotta call on the help of others, like a friend from outside the family. Shelve said friend off on your asshole family members, and maybe you can finally enjoy some peace and quiet! Ideally pick a friend you’ve been looking to cut ties with, as you may never see them again.

If all else fails, disposing of said horrible relative is always an option, in which case you’re gonna want to bring another friend—a sweet lil’ Glock, which you can even buy on the way to dinner, if need be. Just take aim, and poof: no more tense political quarrels! Your fam would’ve wanted you to exercise your Second Amendment rights, after all.