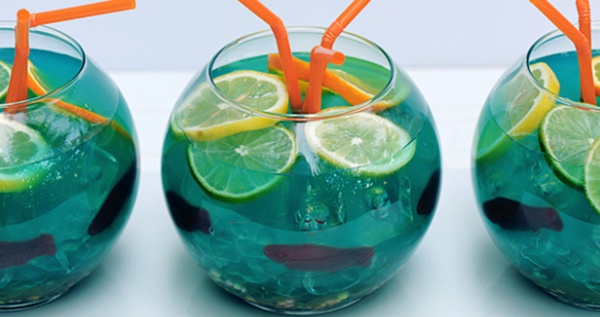 New Brunswick, New Jersey resident Rebecca Leon welcomed her friends over to pregame this past Friday night. The recent Rutgers graduates were reportedly in awe of the fun blue drinks she had made. Consisting of three types of liquor and plenty of sugar, the Pinterest-inspired cocktail seemed like the perfect way to start their night. Unbeknownst to them, however, this wouldn’t be the last time they saw that striking blue color.

Despite starting to feel slightly nauseous, after finishing their hair and makeup, the women decided to each take a final shot, finishing off the blue concoction. Though strongly alcoholic, each woman reports that it was palatable solely from it’s overwhelming “blue” flavor, and the young women say they downed the vodka, gin, tequila, and curacoa combo with ease.

Danielle Duffy noted, “While we waited for the Uber the queasiness became more uncomfortable, but I figured I was just excited.”

Once at the bar, the girls switched over to less-colorful beverages. Unfortunately, the ginger ale in the whiskey gingers did not settle appease their stomachs as they had hoped.

Ariana Nichols was the first to fall victim to the cocktail. She allegedly made it to the bathroom just seconds before puking up a gorgeous waterfall of bright blue. “It’s like if a peacock was a liquid” Nichols stated, “That’s what came out of my mouth.” The friends decided it was best they leave the bar.

Upon hitting the fresh air, the rest of the ladies went down one by one. Like a fountain in Las Vegas, the four young women stood outside the bar, vomiting sapphire into the night. As if their stomachs were endless wells of Malibu rum and poor decision making, they reportedly emptied the entire contents of their stomachs onto the streets in a horrifying-yet-somehow-also-beautiful display.

Finally drained, the friends hailed taxis and departed to their individual homes. Leon commented, “I feel a bit guilty for making these drinks, but they had to know what they were getting into. I mean, come on, there were Gummi sharks in it.”

While the women do not hold a grudge against Leon, they agreed that next time they will stick with transparent liquids, like Everclear.