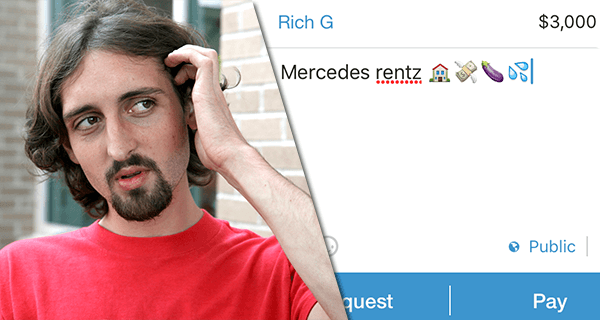 Venmo, an app that combines sending money to friends with social media, has caused some controversy lately over issues of security. But I’ve got a bigger problem with the app: because of the pressure it creates to write a funny comment along with each transaction, I’ve fallen three months behind on my rent.

Sending a Venmo payment without writing a witty and hilarious comment is like going to vote for president and writing in Martin O’Malley: completely pointless, and pretty embarrassing. The app isn’t just about sharing money like PayPal is–it’s a social experience, and you can view anyone’s profile and transactions. And I know what you’re thinking: “You can just make the transaction private!” That, my friend, is essentially creative suicide. Making a Venmo transaction private is basically saying to the world, “I am a valueless human being who has nothing pithy or interesting to contribute to society.”

The problem started when I moved into my buddy Rich’s spare bedroom last year. I wrote him checks for the first few months, contentedly scribbling “rent” on the tiny memo line. Ah, what halcyon, happy times those were. But then about three months ago, Rich casually asked if I could start paying him via Venmo.

In that moment, my audience expanded from Rich and a few innocent bank tellers to the entire Internet. I had a feeling this would be a huge challenge because I’m not “naturally funny,” but I knew that the only way to keep my dignity would be to put all of my energy into crafting one witty Venmo comment every four weeks. And even though I’ve really been trying, my mind has been drawing a continual blank for the past three months.

I know I could go the sexual route, but the first and only time I used Venmo, I’d noticed people writing stuff like “happy ending” and “sensual massage” when they paid people for restaurant tabs, so then I wrote “fucking you in the ear” to my friend Mark because we split quesadillas and he gave me a super weird look and asked me to just pay him in cash next time. That pretty much tanked my Venmo confidence. I haven’t used it since.

I think I’m feeling so much pressure partly because Rich and his friends are all really funny. When a few of the guys hung out at our place recently, they watched an Aziz Ansari standup special. (I didn’t watch with them because I was hiding in my room, peeing out the window, since I’ve been avoiding Rich. Walking to the bathroom would be playing with fire at this point.) Their Venmo comments have only gotten funnier since then. Everyone else is stepping up their game, and I’m not even playing.

Rich has been pretty annoyed with me ever since I stopped paying rent. He just doesn’t understand how hard it is to use Venmo when you aren’t “funny in the traditional sense.”

The other day while I was microwaving a burrito, I heard his key in the door, so I abandoned my dinner and ran into my room. When I emerged two days later, I found the burrito sitting on the floor outside my door with my face drawn onto the tortilla and pins sticking out of it.

Even his retaliation techniques are awesome.

To make up for everything without actually having to confront him, I bought him a 6-pack of his favorite beer and left it on the kitchen table when he was in the bathroom. But he immediately Venmo’d me 13 bucks for it with the comment “I love brew, Jordan!” followed by the money emoji, the house emoji, and the red question marks emoji.

Isn’t that hysterical!? See the pun? Brew is another word for beer, and it rhymes with you. And those emojis are him asking me where the money for our apartment is. He’s so creative.

I was disappointed to see that Venmo payment, though–I was hoping that if I bought him enough beer, it would eventually cancel out the $3000 I owe him.

It’s not even like I’m short on cash—all the money is in my bank account, ready to go! I just can’t send it until I think of the perfect message.

I’ve been using so much energy to focus on thinking of the perfect hilarious Venmo comment that I got fired from my job this morning. It doesn’t matter though, since I’m not paying rent right now anyway.