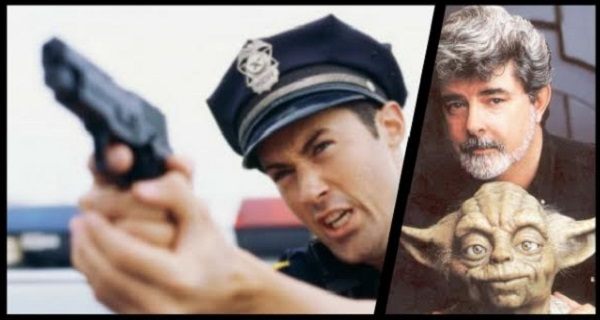 Police chief Sandra Crumb along with officer Milton Hutz approached Lucas at his Skywalker Ranch estate in nearby Marin County yesterday morning and asked him to alter some dashcam footage of a recent police shooting that Hutz was involved in.

The footage in question shows Hutz pulling Lamar Jones of San Rafael California over for a cracked taillight and then shooting him six times in the face after mistaking an asthma inhaler for a gun.

“I admit that I probably should have realized that Jones’ inhaler wasn’t a gun so that one is on me,” said Hutz, “but, you know so many people fake asthma attacks when you pull them over, how was I to know that this one was real?”

“What happened was tragic” added Crumb, “but if the video of Milton unloading on an unarmed black guy were to get out, we would have riots. No one wants another Baltimore!”

“We didn’t know what to do.” continued Crumb. “We were gonna have Suggs down at the station maybe eat the dashcam – ol’ Suggsy will eat anything on a dare – but then someone suggested George Lucas and that sounded like a better idea. We knew that George had a reputation for digitally changing movies so we figured that if he could make Greedo shoot first then he could probably do the same thing for Lamar Jones”

Lucas, who has mostly stayed out of the public eye since selling Star Wars to Disney four years ago, relished the chance to once again add a bunch of unnecessary CGI to a film and gladly accepted the job.

“They asked me if I could change the footage so that the victim looks like he’s holding a gun and firing it at Officer Hutz” explained Lucas, “And I said to them, is a Nerf herder scruffy looking?”

“It was my special effects team that changed the guns in ET to walkie talkies for the 2001 rerelease” Lucas continued, “so changing an inhaler into an AR-15 is right up my alley.”

Unfortunately, the gun wasn’t the only thing the director added to the video. “He put fucking Ewoks in it!” complained Hutz, “And now the victim screams ‘Nooooooooooo!’ like Darth Vader after he gets shot. No court is gonna buy that!”

Lucas stands by his changes however and even went as far as destroying any unaltered copies of the video . “From now on, the Special Edition is the only edition,” said Lucas, “This is the definitive version of that dashcam video… unless I decide to change it again.”