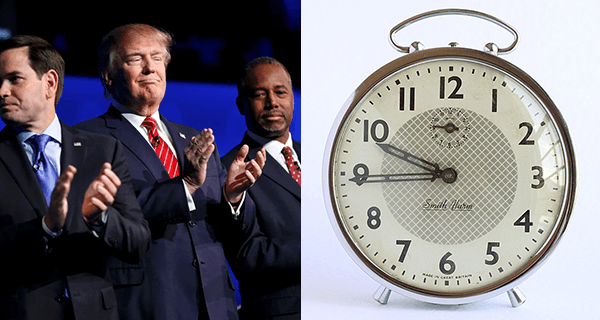 This weekend is Daylight Savings, which means it’s time to adjust your clock and “fall back” an hour this Sunday at 2 am. However, the Republican party is hoping to take things a step further backwards this year by urging citizens to set their clocks back a little earlier—to 1952.

“This flimsy one-hour policy has been failing our country for decades,” said Republican presidential candidate Mike Huckabee. “The American people want a Daylight Savings that helps them move forward, and the best way to do that is to go back in time 63 years.”

Originally, Daylight Savings Time was introduced as a way to conserve energy during wartime, which has rubbed many conservatives the wrong way. “If I’m gonna set my clock back, it’s not gonna be for some liberal environmental propaganda about ‘preserving our resources,’” said Congressman Jason Chaffetz of Utah. “If we’re gonna do it, let’s set it back to a time that really worked for everyone—a time when women stayed in the kitchen, black people stayed in their own schools, and homosexuals stayed completely out of sight. You know, the good old days.”

Recently elected House Speaker Paul Ryan has shown particular enthusiasm for the plan, citing it as the first common cause around which the entire Republican party could rally since 2008. “I never got to experience the 50s, so this is a dream come true for me,” he said. “Luckily, 1952 has something for everyone: McCarthyism, nukes, sexual repression, and casseroles.”

Conservative organizations in favor of the new protocol have aired various TV campaigns promoting the new plan, playing heavily on the nostalgia many Americans feel for a “simpler” time, whether they experienced it or not. “Wake up and smell the coffee (that only cost you 5 cents)” jests one, while another playfully asks, “Remember the days when you could just punch your stupid wife right in her stupid talking face and she couldn’t do shit about it?”

Requests to use Cher’s “If I Could Turn Back Time” were reportedly turned down by the artist.