This is part two of the The Gumshoe Diary

And I was right here: 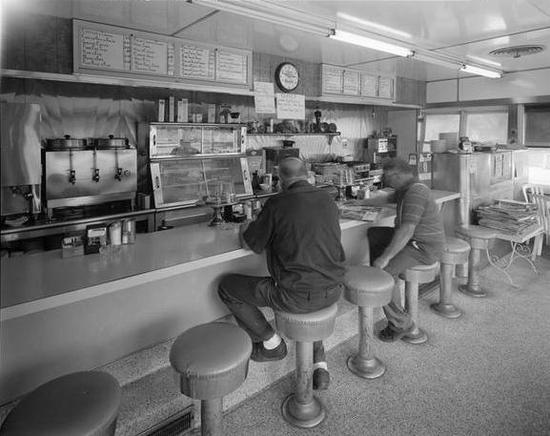 It was a cozy dump famous for its warm coffee, and it didn’t hurt that the napkins were free.

I was waiting to meet my latest client, Mrs. Jane Archer. She’d hired me to investigate her husband’s grisly murder-homicide, an act of violence made all the more senseless by its redundancy. It was a classic case of overkill.

It’d been a week since I first met Jane in my office, and truth is, I hadn’t been able to stop drinking about her.

Jane’s perfume smelled like the finest deodorant. And like her eyes, her breasts were arranged horizontally. Her gams were a mile long, and believe me, that’s the equivalent of 1.6 kilometers.

But I was determined to conduct this meeting like a professional, hot gams be goddamned.

She was running late, so to pass the time I ordered a hot flop steak and took big, wet bites as I pondered her case.

I’d already uncovered an ugly truth about her husband and was hoping she’d come prepared for the worst. Then again, if you know dames, then you know something I don’t.

I checked my watch again and discovered that it was more now than ever. Where the hell was she?

And suddenly, there the hell she was.

The sight of Jane Archer sent chills from my shoulders down to my boulders. Her presence was painfully alluring, yet comforting and familiar. In that way, she was like a sister you wanted to have sex with. And what was it about her body that made me stare at her boobs?

As she approached, I reminded myself that this was a business meeting, so I adopted a sexless tone and asked the six-dollar question:

“Mrs. Archer, can you pay for my flop steak?”

CONTINUED IN The Day-Off Dame, Pt 3

The Gumshoe Diaries begin with The Day-Off Dame, pt 1