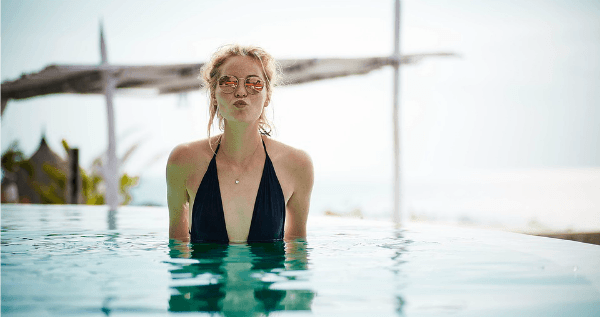 A San Francisco transplant has announced to her friends and select co-workers that she’s happy to call the city her new home after leaving the affluent but “lame ass” suburb she was raised in, according to several eyewitnesses.

Marin County native Bailey Clapham was overheard lambasting her hometown over a recent brunch outing, dismissing the area for being “too white,” a detail she shared with the table of entirely Caucasian friends, each clad in exclusively Supreme-brand clothing.

“Yeah, I don’t know, it was nice and whatever, but I just felt like I was suffocating there or something,” explains the 23-year-old recent college graduate. “I’ve lived there my whole life and just felt like I needed to be around more people who get me if that makes sense.”

“Plus, the gyms all suck and it doesn’t even have a Chipotle,” she added.

Clapham is happy to report that she is much more comfortable in her new neighborhood, which not only houses her doorman-equipped waterfront co-op but several “old-school” San Francisco amenities as well.

“It’s pretty sweet. There’s these cute, amazing restaurants that’ll Seamless me over pretty much anything, and the little Chinese ladies who collect the cans in front of my building are literally the nicest, ever. They’re like, my second mom or something.”

Despite certain frustrations that come with living in a densely-populated city, Clapham remains determined to stay positive, a trait she credits to her time “basically studying abroad” at a nine-day silent yoga retreat in Costa Rica, a birthday gift courtesy of her father.

“Sometimes the public transportation can be a little shitty, but you can get an Uber to pick you up literally anywhere, so it’s totally nbd,” Clapham says. “It’s super convenient, actually, I don’t even know why anyone bothers with the gross transit anymore.”

Clapham has a few words of advice for anyone who feels “trapped” by their own hometowns.

“If I could say one thing to anyone back home who hasn’t seen the light yet, it would be to expand your horizons and just move literally anywhere else,” she said. “There are a ton of awesome condos opening up all over the Heights now, and most come with a parking space, so you can still totally jet outta town when you need a break from the city. It’s literally, the best.”