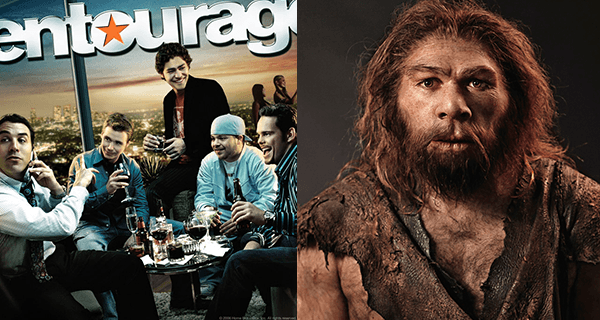 A potential new ancestor of man was discovered earlier this week, and he’s already expressed extreme excitement about seeing the Entourage movie. Minutes after a team of paleontologists removed him from the 3-million-year-old site, he shouted, “Took ya pussies long enough! Now which of my homies is checkin’ out the Entourage flick this week?”

The hominid was discovered in what scientists have identified as a prehistoric man cave. Crude drawings of breasts were found etched on the walls, along with petrified mammoth antlers and reclining stone slabs draped in fur pellets. Quickly after his unearthing, the primitive descendent high-fived the entire team and shouted, “Let’s hug it out, bitch!” then forced them into a group hug. “No homo sapiens! Get it?”

“I’m totally fuckin’ stoked to see my boys back in action!” he said. “Especially Ari. I’m kinda the Ari of all my friends. Though today I’m feeling a little more E.”

Until the premiere, the newly discovered species says he’ll be busy “chillaxing in the lab, throwing back some brewskies, and watching old eps on HBO GO” while scientists run further tests on his bones, which bear a striking resemblance to “Lucy,” a previously discovered specimen found in 1974.