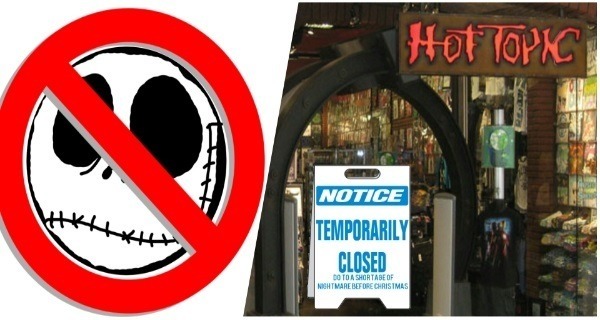 A local Hot Topic almost went out of business this weekend after running out of Nightmare Before Christmas merchandise. The store, located at the Natick Mall in Worcester, MA, failed to get its usual shipment of merchandise on Friday, and quickly sold out of what little Nightmare inspired stock they had left.

“When we sold our last Oogie Boogie hoodie on Saturday afternoon…that’s when I knew we were in trouble!” confessed 24-year-old assistant manager, Doug Bindlestiff.

“We just started hemorrhaging customers left and right. I tried to keep them from leaving by taking 50% off of all of our ‘Avenged Sevenfold’ tees and Tardis cookie jars, but by the time I got the signs up it was too late; the store was empty. I guess no Skellingtons equals no Benjamins.”

Though the Hot Topic chain has long held a reputation as a place that teens longing for mass produced individuality can go to buy their goth and punk fashion, sales of piercings and studded belts actually make up less than 4% of all purchases.

“The majority of our profits come almost exclusively from products based on the 1993 stop-motion film Tim Burton’s The Nightmare Before Christmas,” explained Hot Topic CEO, Lisa Harper.

“That’s why we try to keep all of our stores filled to the brim with TNBC stuff,” she continued, “But occasionally a store will run out of stock and when that happens…well, we have a saying at Hot Topic: Run out of Potter or Who, lose a customer or two. Run out of Sally and Jack, your store will never bounce back!”

Indeed, though Bindlestiff tried his hardest to keep customers coming in – including at one point, offering a free Falcor Pop with every purchase – it didn’t take long for word to spread that the Natick Hot Topic was Nightmare-less, and by Sunday the store was a ghost town.

“We did have one guy come in and almost buy a T-Shirt,” confessed cashier Lindsey Merkel, “But once he realized that it was actually Corpse Bride, he threw it on the floor in disgust and stormed out.“

“We tried pushing everything else Millenials seem to like: Invader Zim, Labyrinth, even My Little Pony: Friendship Is Magic but no one was biting!” said Bindlestiff.

At closing time, Blindlestiff expressed relief that the day was over. “I’ll be so happy when millennials finally glom onto something else, I’m getting kind of sick of Jack and Sally. Besides, how many articles of black and white striped clothing can a teenager actually wear?”

If Hot Topic’s sales are any indication, a lot.