REAL TALK: I Rode The Baggage Claim Carousel, And Yeah, It Was Fucking Awesome. 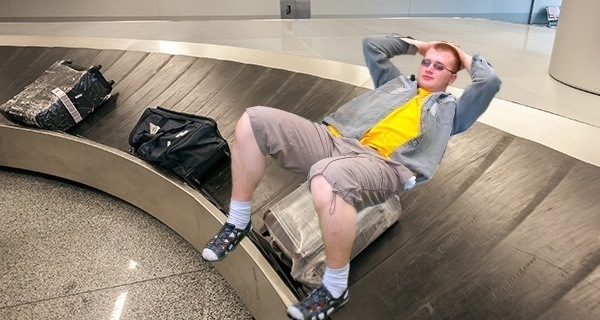 I did it. I actually fucking did it. The rest of you suckers just stare at that beautiful bitch, only dreaming about hopping on.

I see you hollow-eyed lackies with your slack jaws, watching for your stupid black suitcase with the ribbon tied around the handle. You’re all the same. And you all dream of hopping on board that mofo and riding it all the way around, too, but you never do it. You’re a grown-ass adult but you’re still too scared to make even the most attainable of childhood dreams come to fruition. Not me! I DID IT.

There was literally nothing stopping me. It was 3AM at JFK, and the beginning of the rest of my life. I rode the baggage claim carousel, and yeah, it was fucking awesome.

What exactly happened, you ask, when I tasted the forbidden fruit? I sandwiched myself right in between a duffle bag that suspiciously looked like it had like two sweaters inside, and something totally unidentifiable that was wrapped in nine inches of clingfilm and at least three rolls of packing tape. And then I sat there.

What happened next was amazing; a total New York moment. Everyone who was waiting for a bag lined up next to the carousel and extended their palms to me, so I slapped them on my way around, like I was an NBA star running on court for the national anthem.

I’ll admit it; I got a little worried when I saw TSA walking towards me. But those motherfuckers bowed down. One of them actually told me, with tears streaming down his face, that I was the most beautiful thing he’d seen since the birth of his son. Shit was emotional.

I even got up and walked backwards on it, like a boss. I looked like motherfucking Michael Jackson, swear to God. And then I ran around in that little elevated middle area like a kid on a beach.

Did a Goddamn cartwheel and everything.

So listen up kids: you can follow your dreams too. All you sad suburban dads absentmindedly shuffling other people’s bags around to “help organize” – stop lying to yourselves. Take a look in the mirror. Are you who you wanted to be? Remember when you were a kid and you couldn’t wait to grow up so you could make your own decisions? What decisions have you actually made lately? Which color grout to use on the bathroom sink backsplash? Whether your entryway table should be varnished in glossy or matte? Give me a break.

Anyway, I’m in jail now. Turns out that shit is a crime.

But at least I can truly say: I have lived.