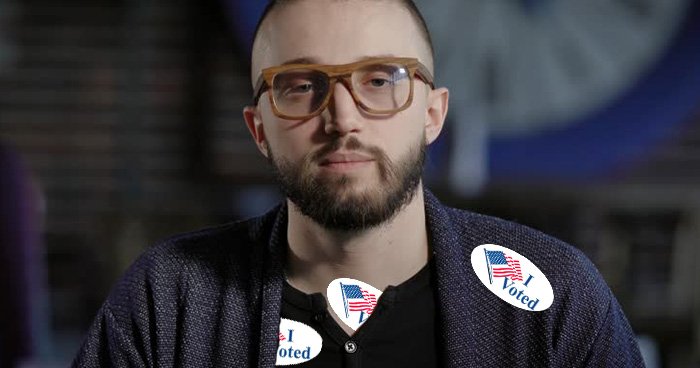 Roanoke, Virginia man, Kyle Leitner, 28, emerged from the polls after yesterday’s elections feeling elated after having done his civic duty. “Millennials get a bad rap,” said Leitner. “Everyone’s always saying we’re used to getting everything handed to us, but I believe in hard work and pulling yourself up by the bootstraps. No one ever handed me a participation trophy!” Leitner quipped, while placing an ‘I Voted!’ sticker on the outside of his jacket.

Leitner, who believes that children shouldn’t be told that they’re all unique or special, has alternated moving his sticker between his jacket, his sweater, his iPhone case, and the skin of his exposed arm. “I think it’s ridiculous to insinuate that everyone in my generation needed constant positive reinforcement,” Leitner stated while adjusting his Patagonia fleece to make the sticker more visible. “Speaking personally, I can say that I don’t do good deeds for praise or acknowledgement. I do them because they’re the right thing to do.”

Though the Virginia native, and vocal LGBT ally, admits he was out of the country and thus unable to protest against a proposed anti-transgender bathroom bill, Leitner noted that he did post about it on Facebook. “I was backpacking through Thailand when all that stuff went down,” he stated, “But I changed my profile picture to that trans pride filter thing – it’s important to do whatever we can to effect real change.”

Shanice Curtis, a volunteer for Leitner’s polling station in Roanoke, says her interaction with the young activist left an impression. “Oh yeah, he was in here to vote yesterday,” she recalled. “I had to tell him twice not to take pictures of his ballot, and then when I told him I’d run out of stickers, he told me he’d wait until we got more…he was there for like, three hours.”

For his part, Leitner hopes the youth of today are being raised with the same sense of humility and service that he was. “As long as they understand what it means to do brave things for integrity, and not praise, but also find a way to be praised for them…they’ll do just fine.”

At press time, Leitner was peeling the backing off a “My Dog Is Smarter Than Your President” bumper sticker.