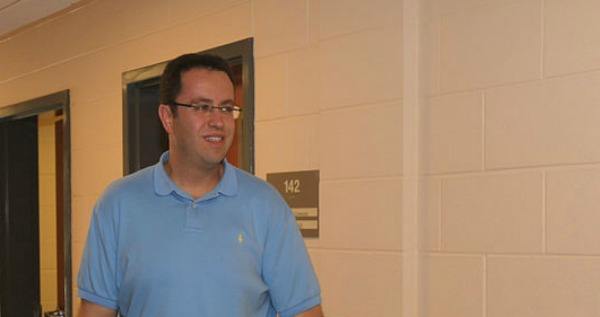 If it were illegal to concoct genius pranks, Jared Fogle’s bunkmate, Michael, would be in prison for two life sentences instead of just the one (serial arson)! Check out these incredible pranks that Michael played on his unsuspecting sandwich-loving bunkmate:

1. Michael once smothered Jared’s bunk in mustard so when Jared went to go to sleep his back got all slippery and slimy!

2. Michael surprised Jared when he was heading to the cafeteria and punched him in the head so many times that Jared spent 3 weeks in the infirmary.

3. Michael tied Jared’s shoelaces together so Jared tripped when he tried to walk to the bathroom!

4. Michael whittled a shiv from a toothbrush and stabbed Jared in the neck. Haha, Michael must be a comedian trapped in the body of a man who maliciously sets fire to people’s property or something!

5. Michael rubbed scalding hot butter on the basketball and passed it to Jared. Then when Jared dropped the ball, Michael yelled, “Hey Butterfingers, nice catch!” and everybody on the court laughed really hard.

6. Michael hit Jared in the face with a piece of pipe which knocked several of his teeth out. It was definitely one of those “you had to be there” kind of things, but believe me, this one totally landed!

7. Michael put on a fake mustache and pretended to be Jared’s lawyer. When Jared said “Hey, y’know, you don’t seem to know anything about how to structure a case,” Michael took off his mustache and said “Hahahaha it’s just me Michael! Your lawyer dropped your case.”

8. Michael flew into a rage one night, broke a mirror, pinned Jared to the ground, and held a jagged piece of glass against Jared’s throat for several hours while screaming at him the whole time. How does he even think of these things?!

9. Michael said “Hey Jared, meet me at the end of the cell block just before the evening count. I have a plan for us to escape! ” but when Jared got there, Michael popped out from an adjacent hallway, farted towards him, and giggled.

10. Michael told Jared to go up to the largest inmate, Brawny Brian, and say “Hey fella, I heard your pussy tastes just like your mom’s asshole, is it true?” Michael convinced Jared that Brian would find the question hilarious, but in reality, Brian became very upset, because his mother had just died. Jared inadvertently ending up triggering a majorly depressive episode for Brian, as well as the biggest riot the prison had seen in several years, and thus became ineligible for parole. LOL, classic Michael!