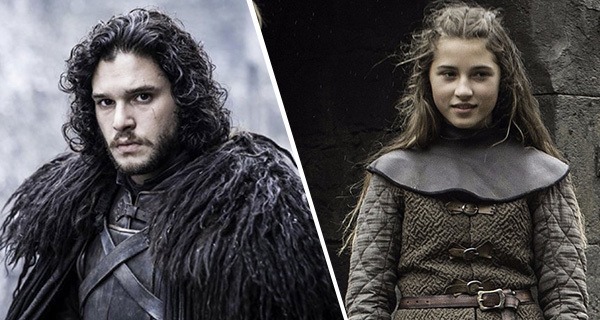 Many have speculated that Jon Snow’s birth is the resulting union of Lyanna Stark and Rhaegar Targaryen, though in the Game of Thrones universe, it’s still assumed that the deceased Ned Stark is his father. And with recent developments such as speculated same-sex parents in Finding Dory and the #GiveElsaAGirlfriend campaign, the non-traditional family unit is becoming an increasingly more accepted part of society.

We are totally living for this development. We have so much respect for David Benioff and D.B. Weiss for recognizing that audiences are ready for these kinds of alternative family units. Here are our ab fave things about Jon Snow’s very own modern family, that we can all relate to:

Whether Jon Snow’s mom is Lyanna or a common tavern whore named Wylla, one thing is for sure: no one put a ring on it! We are LOVING this full on bad bitch angle, proving once and for all that you don’t need a man to birth the next Lord Commander of the Night’s Watch. Get it, gurl!

2. He comes from a blended family:

Raised by a strong, sassy, independent woman who isn’t his biological mother, the Starks truly proves that family is what you make it. Even though Catelyn basically wanted Jon dead (serving up that icy, resentful stepmother of a Dornish whore-baby REALNESS), the Starks show us that love conquers ALL.

3. His parents are dead:

It’s 2016 people – LGBT families are basically the norm now. Dead is the new gay! We’re so glad to finally see someone with dead parents represented in mainstream culture – and we are DYING for this dreamy orphan. #YASSSSSJON

4. His mother probably perished in a pool of her own blood, terrified that her precious baby would be murdered by any family partaking in the rebellion:

We’ve suffered countless years of the media shoving the unrealistic fantasy of a traditional family unit down our throats, but the reality is MOST of us don’t fit into the mom-dad-dog-picket fence-2.5 kids delusion Hollywood has convinced us is reality. It’s refreshing to finally see a family that looks like so many of ours – a mother who died in childbirth while pleading with her brother to spare and protect the life of her child so that he may one day rise to save the Seven Kingdoms and Realms Of Men. WERK.

5. His father is Rhaegar Targaryen, Prince of Dragonstone, Crown Prince of the Iron Throne, slain in single combat by Robert Baratheon at the Ruby Ford during the Battle of the Trident:

Now here’s one you can relate to, no matter your age, creed, color, or sexual orientation! We’ve all felt like our wacky family fits into this category at some point in our lives – and sometimes we all just need to be reminded that we’re not alone. #WeAreAllJonSnow