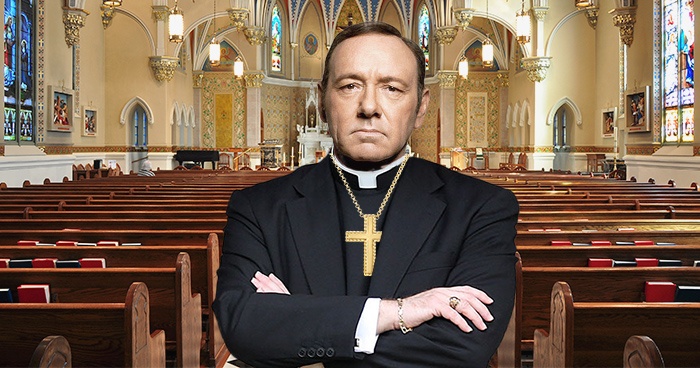 Two-time Academy Award winner Kevin Spacey announced today that he’ll be taking an “indefinite” break from acting. This announcement comes in the midst of a career tailspin for the veteran actor, who was fired from “House of Cards” and had several film projects shelved after accusations of sexual assault and misconduct went public.

“I can no longer run from my sins,” Spacey said. “I have to face the demons inside me that compelled me to do such terrible things. I have to conquer my homosexuality, and specifically my attraction to younger men and boys. That’s why I’m leaving Hollywood to complete my seminary training.”

Spacey had begun training to be a Catholic priest in 1995 as part of his method acting research for the movie “Se7en”.

“Taking those classes at the Sweet Valley Seminary was just what I needed to get myself into the mind of a Biblical serial killer,” the actor confessed. “I always meant to go back and finish my training, but I couldn’t fully devote myself to God until I got this Bobby Darin vanity project off my plate.”

Father Colin Martinque, a senior instructor at Sweet Valley Seminary, believes that a life of ecclesiastical humility is just what the troubled actor needs to redeem himself.

“For a man struggling with pederasty, there is no better cure than the priesthood,” Father Martinque. “Surrounded by other men, wielding great power and influence over impressionable young boys – it’s the perfect environment for Kevin Spacey to forsake his blasphemous lust for hot boy-flesh.”

Spacey’s work ethic as an actor has already propelled him to the top of his class.

“He’s shown an incredible gift for mentoring,” Father Martinque marveled. “Whether it’s working with altar boys, donating his time to underprivileged youths in our outreach programs, or helping our younger students overcome their struggles with onanism, Kevin Spacey is the first to volunteer his time and the last one to leave. He’s going to go far in the Catholic Church.”

According to Spacey, rising in the ranks in the Church is the farthest thing from his mind.

“Career ambitions and social climbing aren’t my top priorities anymore,” he explained. “I just want to make sure that the evil urges inside me that hurt so many handsome and stacked young men never come out again. All I can do now is pray the gay away and hope that God forgives me for all the butt stuff that I’ve done.”