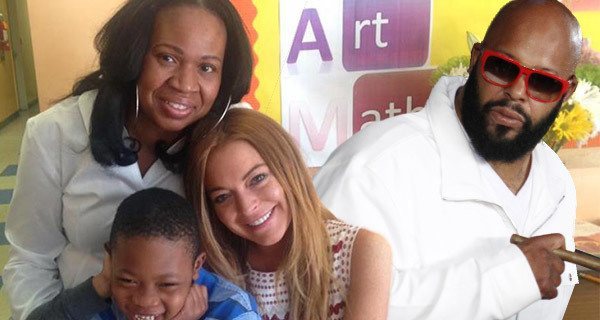 On Wednesday morning, Lindsay Lohan reported at the Duffield’s Children Center in Brooklyn, NY to begin her court-ordered community service hours. Accompanying her was Death Row Records CEO and accused murderer Suge Knight, who was also beginning court-ordered community service hours—to babysit her. An additional 12 security guards were sent to watch Knight as he watched Lohan as she watched the kids.

Earlier this week, Knight’s lawyer filed a motion to dismiss his client’s murder trial, which was honored under the condition that Knight give back to society. “My buddy in New York told me he fucked up with that Lohan ruling, so I figured, why not kill two birds with one stone?” explained the judge.

Upon their arrival, Lohan’s mother, Dina Lohan, handed the rap mogul a list of emergency contacts, including the Promises rehab center, a pharmacist in Thailand, Skrillex, and Dina herself—who was only to be contacted under extreme circumstances as she was busy petitioning Governor Cuomo to reverse his emergency crackdown on nail salons.

Knight originally planned to keep Lohan in line by casting an ominous death stare from a dark corner of the room while he smoked a cigar, but this quickly proved useless as the actress had already flashed a janitor by 8 AM. “At that moment, I realized I had to resort to traditional babysitting,” he said.

The rest of the morning was largely spent preventing the Lohan from teaching kids what “69” meant and restraining her from using a shredder to modify her sundress. As she had ingested 7 bags of Sour Patch Kids and 5 Adderall for lunch, Knight sent her to the playground to “run out her energy,” which was immediately followed by naptime.

At approximately 3 PM, Lohan enlisted a group of children to lock Knight in the storage closet, during which he used the count-down-from-10 technique to successfully persuade them into releasing him. “After that, I just threw my hands in the air and turned on Little Mermaid. Thank God for that movie.”