Scientists Think Male T-Rex May Have Used Penis For Sex 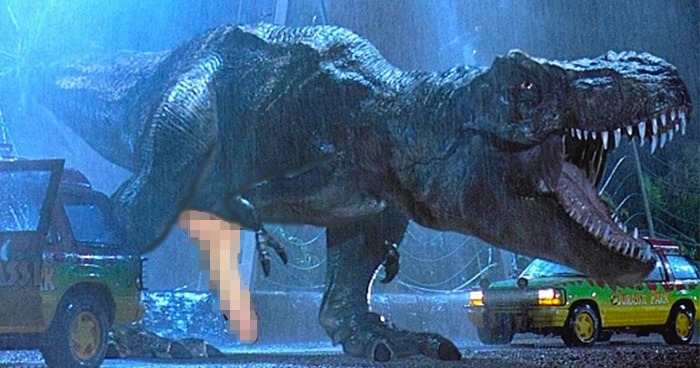 Paleontologists have long considered the T-Rex to be the biggest dick in the dinosaur kingdom, but a new discovery suggests it may have also had one.

According to new groundbreaking research, not only did male Tyrannosaurs probably have fairly large penises, but scientists are positing that they used them to impregnate females. Scientists in New Mexico came up with this theory after unearthing the skeleton of what is believed to be a previously undiscovered species of Tyrannosaurus rex with a giant bone between its legs, assumed to be the remains of a prehistoric sex organ.

“Tyrannosauruses were originally thought to reproduce asexually, a conclusion that I and many of my peers came to based on the penisless T-Rex in the movie Jurassic Park. With the discovery of the Dongosaurus expandus however, we can now hypothesize that Tyrannosaurus Rexes reproduced by making a Peepee and Vajayjay sandwich just like we do, despite Steven Spielberg’s Ken doll crotch dinosaurs.”

Simons believes that given the Tyrannosaurus’ large tail, the only viable mating position the creatures could have engaged in was the missionary position.

“Those giant tails flopping around would make it very difficult to engage in doggy-style sex,” says Simons. “One wrong swipe and there goes your wiener, snapped in half like a carrot! That might be the reason why we haven’t found more cock fossils, all of the males were de-schlonged by an overzealous mate’s rear appendage!”

Some paleontologists like Jennifer Milton, however, are reluctant to adopt the theory without further proof.

“How do we know some joker didn’t just take a leg bone from some other dig site and put it between the legs of the Dongosaurus when no one was looking?” asks Milton. “I’m just not ready to abandon the long-held belief that Tyrannosauruses reproduced by spontaneously sprouting mini T-Rexes all over their bodies ala Gremlins in favor of some stupid dino-porn fantasy.”

Simons admits that the idea of T-rex sex is a little hard to swallow for some people, which is why he and several of his colleagues plan to continue searching for definitive proof of Tyrannosaurus mating habits. “If I could just find a fossilized Tyrannosaurus vagina or some semen trapped in amber than I could prove to everyone once and for all that T-Rexes liked to bone just like everyone else,” says Travis.

“Until then I’ll just have to keep trying to convince the world based on the petrified Triceratops bladder condom we found lying near the Dongosaurus expandus skeleton. If the T-Rex did like to get it on with the ladies, at least he was safe about it. Whatever it was that killed the dinosaurs it wasn’t a pre-historic STD, that’s for sure.”