Family Dog Didn’t Sign Up For This Matching Pajamas Bullshit 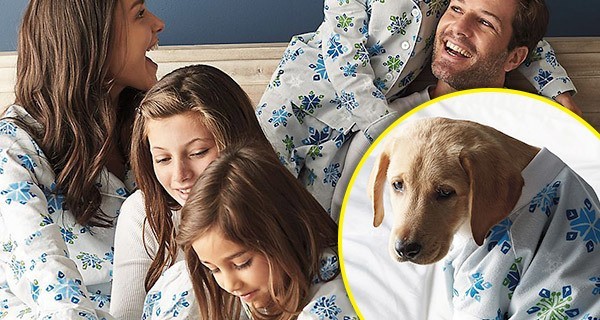 When a package from The Company Store arrived on the Wilkersons’ doorstep yesterday afternoon, parents Annie and Kip called for their kids to come take a look at this winter’s shipment of matching family pajamas. Unfortunately for the family dog, this year’s set contained a snowflake-covered onesie for him too, marking the first time he will be forced to participate in the schmaltzy tradition he has skillfully avoided up until now.

Charles Barkley, the white lab who has been living with the Wilkersons since 2009, said he was completely uninvolved with the purchase of the garments, though he is sadly unsurprised by their arrival. “I somehow managed to get out of this cornball garbage for years, but I knew it was only a matter of time before those assholes brought me down with them.”

Despite this being the first year Barkley will be forced to wear matching pajamas, he noted that the family has participated in this kind of insipid foolishness as long as he has known them. “These are the people that named me after a basketball player because his last name contains ‘bark.’ Their doormat says ‘Wilk-come’ instead of ‘Welcome.’ They make monthly parody rap videos for their family YouTube channel which they have the gall to advertise on. If it wasn’t obvious already, they’re 100% insufferable.”

After blankly staring at the family portrait hanging above the mantle, he sighed, “Seriously, fuck these clowns.”

A mere nineteen hours after the arrival of the package, Barkley found himself wearing the festive, flannel garb. After attempting to stall under the guise of a walk outside to relieve himself, he realized resisting would be of no use. Patiently sitting in the laps of the youngest two children, Madison and Vance, the canine resigned to the routine licking and panting required by the Wilkerson’s transparent ploy to endear themselves to the world with trite, overproduced mush.

“I used to think Annie was the worst,” said Barkley. “But it’s actually Kip. Did you know he’s currently pitching a Wilkerson reality show to Oxygen right now? If that happens, I swear I’ll run in front of the first car I see.”

Luckily, the Labrador Retriever will get a rest from the Wilkersons’ self-indulgent trash once Christmas comes around. “They leave me at ‘Pooch Hotel’ while they go off to visit family in Fort Lauderdale. Sitting in a cage for 92% of my day is a welcomed vacation compared to the sentimental torture I’ll be putting up with the week before.”

When asked if he planned to participate in the Wilkerson’s upcoming parody of “Hotline Bling,” he said, “As long as they plan on finding a huge pile of dog shit at the foot of their tree this year.”