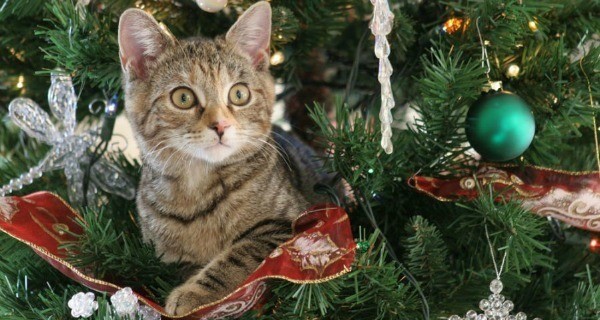 The Chaffee family is reportedly well on their way to completing the decoration of their Christmas tree, an annual tradition for the Spokane, Washington natives. The tree, whose adornment ceremony brings the family together each year, is almost ready to be entirely destroyed by the family cat, Bonkers, a seven year-old grey Tabby, who is pretty much just the worst.

The tree currently sits proudly in its water-filled stand, which has already needed replenishing three times in as many days thanks to the cat, who the family notes has not actually consumed any of the water, just “splashed it all over the fucking floor.” Matt Chaffee, father and regretful pet owner, left almost no room between the tree and the electrical outlet this year in hopes of deterring Bonkers from using the cord to pull the entire seven foot tree onto its side, as he did in 2009, 2010 and then once again in 2013. “I guess we’ll see,” remarked Chaffee. “Short of putting a damn fence around the whole thing or just, y’know, shooting the cat through the head, I really don’t know what else to do,” he continued, pausing ever so slightly too long before laughing.

This year the family has opted for gold tinsel, hung with the utmost care by the young Chafee children, which can and will be easily torn to shreds by Bonkers’ teeth, claws, or most likely, a combination of the two. “I’m not going to suggest that the cat is trying to cause us emotional distress, but I will note that he somehow seems able to distinguish ornaments of great sentimental value from the CVS filler ornaments,” opined Mrs. Chaffee, who at that point opted for a midday glass of wine.

“At first it was kind of cute,” recalled Mr. Chafee. “The girls got a real kick out of seeing him tangled up in the lights, but now it’s almost like he’s ruining everything on purpose.” Convinced that he noticed Bonkers make direct eye contact while batting the angel topper from the tree last year, Chaffee worries that the playful antics may actually have more sinister motives.

“I find myself constantly having to explain to the girls that Bonkers doesn’t hate Christmas or wish either of them any ill will, but honestly, I just don’t know if that’s true,” Chaffee said.

Having learned their lesson from years past, the family now keeps their meaningful, heirloom ornaments in a box in the attic, instead using cheap “decoy” bulbs to dress the $72 fir. “The hand blown, frosted ornaments that belonged to my Grandmother are really special, but I guess these plastic balls will have to do,” Chaffee says of the Dollar Store-brand bulbs that simply bounce upon hitting the floor, rather than shattering into a million pieces which Bonkers then systematically tries to eat.

For the ceremonious finale, the family expects to gather around their Christmas tree to affix the lighted angel topper in approximately 24-36 hours, or whenever the glue attaching the angel’s head to its body finally dries.