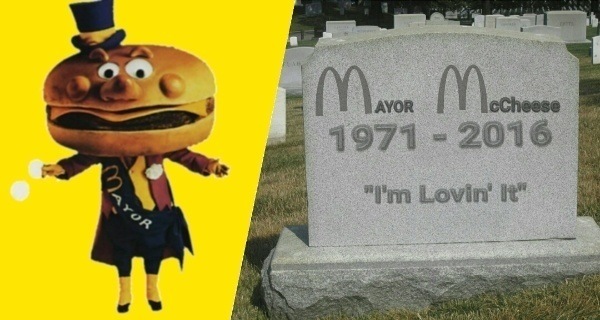 Mayor McCheese, age 45, was found dead today in the McDonaldland apartment that he shared with long time partner and McDonaldland constable, Big Mac.

Mac reported coming down stairs early this morning and finding McCheese slumped over the kitchen table in a puddle of his own ketchup and mustard, his patties cold to the touch. Big Mac quickly called 911 but the Mayor was dead before the EMTs arrived.

The cause of death appears to be a super-sized heart attack, which the official McDonaldland coroner attributes to Mayor McCheese’s unique anatomy. “The guy has a large, greasy cheeseburger for a head,” commented the coroner. “It’s literally been pumping fat directly into his arteries for 45 years, it’s a wonder the guy didn’t keel over years ago. Plus he ate a lot of McGriddles, and those things are worse for you than cigarettes”

A wake for Mayor McCheese was originally scheduled for tomorrow evening, but has now been postponed indefinitely after the notorious criminal known as The Hamburgler made off with the Mayor’s corpse, or more specifically the corpse’s giant cheeseburger head.

“It’s one thing to swipe a hamburger here or there,” said a disheartened Big Mac, “But desecrating a corpse, no matter how delicious, is taking things too far! I will use every resource at my disposal to catch this bastard and bring him to justice. Depending on where The Hamburgler started taking bites, we may still get to have an open casket.”

In place of the wake, a candlelight vigil led by Birdy the Early Bird and McDonaldland’s resident purple blob Grimace will be held tonight in remembrance of the Mayor. All are welcome to attend the regular ceremony, or attend an extra special ceremony with free fries and soda for an extra $2.95.

“Everyone in McDonaldland loved Mayor McCheese,” lamented Grimace. “Not that he was perfect — he had a bit of a drinking problem. I don’t want to speak ill of the dead but let’s just say we all knew to stay out of his way during Shamrock Shake season. But then what do you expect with a name like ‘McCheese?’”

The funeral will be held at the McDonaldland Play’n’Fun Cemetery once the body is recovered. Big Mac is expected to scatter the first ceremonial slices of cheese on the casket.