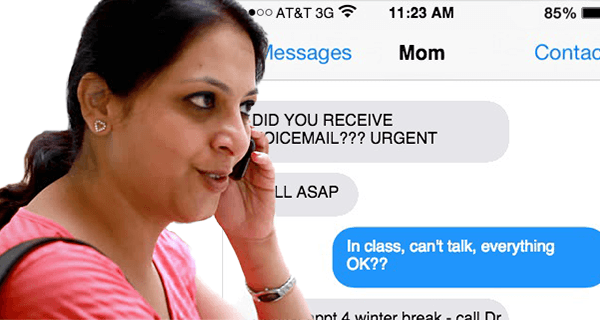 Isha Chaudry, 53, reported this week that she “couldn’t wait” to leave her daughter a voicemail and then subsequently transcribe the entire voicemail in a series of 8 text messages.

The Merrimack, New Hampshire woman and mother of three was reportedly “ecstatic” to find as many ways as possible of reminding her 19-year-old daughter Mira about the need to schedule an upcoming dentist appointment.

“Well, I’m definitely going to try her cell while I know she’s in her Physics lecture – that way I don’t run the risk of her actually picking up the phone,” said Chaudry. “Then, when she hasn’t responded within the next forty minutes, I’ll send her a panicked text message that will read something along the lines of ‘DID YOU RECEIVE VOICEMAIL???? URGENT, CALL ASAP,'” she continued.

“At that point, she’ll text me something akin to, ‘In class, can’t talk, everything OK?’ Which will allow me to follow up with a detailed and yet somehow unintelligible summary of the very same message I just left.”

Chaudry – who plans to also forward her daughter the receipt from her previous dentist appointment two years ago with a mysteriously BCC’d reply that says only, ‘DID YOU RECEIVE?’ – is currently contemplating the best way to divide up the eight part mini-series.

“I’ll start with something along the lines of ‘Dentist appointment – must schedule’ and then, ‘Winter break? Dr. Bell called house,'” reported Chaudry. “After that I might say something like ‘Thinking 11AM December 16, you can ask your aunt to drive you’ and then a ‘PLS CONFIRM’ followed by an emoji of a pigeon, a caterpillar, and the Easter Island head for good measure.”

Chaudry, however, says some parts of the process are out of her control. “My ideal situation is for some number of texts to send out of order, so things really get confusing,” says Chaudry. “A woman can dream.”

At press time, the younger Chaudry had reportedly responded to her mothers’ texts with a prospective time and date for the dentist appointment, however her mother had in turn replied, “Did u get voicemail? Listen and call ASAP!”