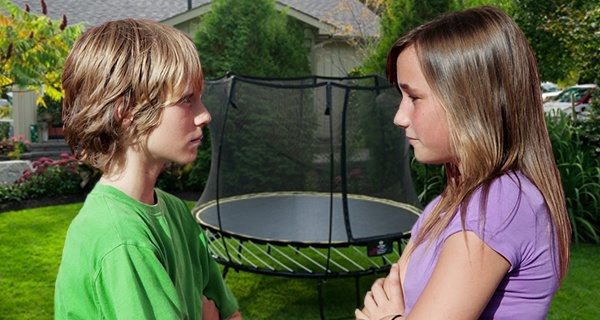 Children in a small Illinois suburb found themselves in a heated dispute this week over whether or not the Dressler house was technically the “best house” in the neighborhood after local kids agreed it had unequivocally the worst snacks, but for sure the best trampoline.

Caroline Holleran, 12, leader of the “best house” faction clarified, saying, “It’s not just the trampoline – Mrs. Dressler works full time so no one is ever home. It’s awesome.”

Robbie Krieger-Fields, 11, could not disagree more with Ms. Holleran, rebutting, “It doesn’t matter how sick the trampoline is – all they have is Newman-O’s and fruit leather. One time I thought Mrs. Dressler had finally given in and bought some good food, but it just turned out to be a cookie tub full of almonds.”

In addition to never being home and having a sweet trampoline, the Dresslers reportedly also have a hilarious dog, a giant collection of scary movies, and a mostly-functional Slip-N-Slide, which Holleran states, “Should 100% tip the scales in their favor.”

Krieger-Fields, however, countered, noting that the Dresslers also have, “A terrifying basement and all their games are missing pieces.”

This debate will come to a head this weekend when the group of sixth graders have to decide where to throw their end-of-the-year sleepover, which subsequently dictates where they spend the majority of their summer. Krieger-Fields feels passionately that it should not take place at the Dresslers as they have “a painting whose eyes follow you around the room.”

At press time, the gridlock had disappeared with the Dresslers announcement that they were buying an above ground pool next week. Krieger-Fields graciously admitted defeat, stating, “POOL!!!!!”