Despite Public Pressure, Nordstrom Refuses To Start Decorating For St. Patrick’s Day Until After Thanksgiving 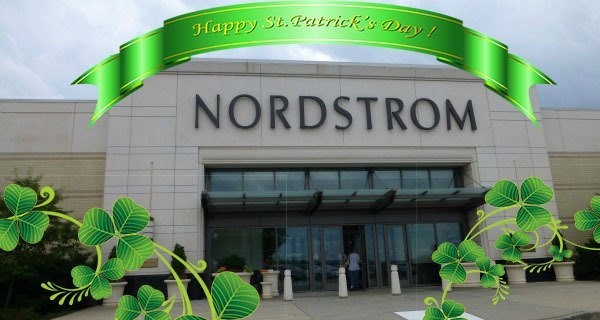 Pictured: Nordstrom as it will appear on November 27.

Nordstrom, the large Seattle-based department store company, announced this week that they refuse to give into cultural pressure and will not, in fact, be decorating for St. Patrick’s Day quite yet.

Many are hailing the move as an inspirational rejection of holiday commercialization. When questioned about their bold decision, brand representative Malika Patel sent us an explanation by mail. “Here at Nordstrom, we notice our competitors stuffing their windows full of cheap leprechauns and tacky green tinsel long before Thanksgiving, just to make a buck! But not us,” read the missive, printed on Easter-themed stationary.

Co-president Blake Nordstrom, who runs the company with his two brothers, is quick to downplay any talk of heroism on his part. “Look, ultimately, we’re just a family business,” he stated, “and just like your family, we understand how much effort it takes to schlep all those cardboard boxes marked ‘Thanksgiving’ down from the attic. And then what? Before you’ve even finished strategically placing the last decorative gourd in your window box, it’s time to start digging around for the aluminum shamrocks? It’s ludicrous!”

When asked if he thought the store’s decision could be perceived as some kind of attack on St. Patrick’s Day, Nordstrom replied, “Look, it’s nothing against the holiday itself. But much like Rosh Hashanah and Boxing Day, St. Patrick’s Day is just becoming a cash cow for the retail industry. Here at Nordstrom, we want to keep the focus on one holiday at a time.”

Though Patel does recognize that scaling back on holiday decorations could deter some customers, she believes Nordstrom’s core consumer base will appreciate “our taking it down a notch.” She added, “And we won’t be playing St. Paddy’s day music incessantly either.”

Patel further confirmed that anything by the Dropkick Murphys is off the table for now, along with all tunes by Flogging Molly, or even the whimsical trill of Hanneke Cassel’s fiddle solos. Nordstrom himself added, “You won’t be hearing Danny Boy in OUR store, certainly not until after the turkey has been cut this holiday season.”

When questioned about their decision to begin adding Valentine’s Day decorations to their window display, Nordstrom stated, “I mean, we’re pioneers for the cause, not martyrs!”