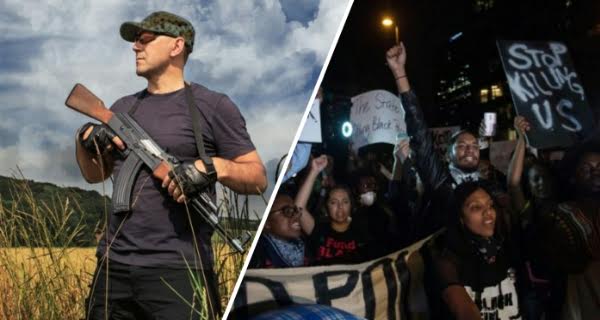 A local man who keeps guns in his house just in case he has to overthrow the government expressed confusion yesterday over the recent riots in Charlotte, NC.

“Why do these people have to be so destructive?! Can’t they protest peacefully?” Asked Bob Mahon, while polishing a 9MM handgun. “Violence isn’t going to solve anything.”

Mahon – who saw nothing wrong with Ammon Bundy’s armed occupation of federal land in early 2016 – feels that it would be in the Black community’s best interest to obey the police at all times and give them their full cooperation, no questions asked.

“If these people would just do what the cops tell them to they wouldn’t get shot,” opined Mahon, who once got into an altercation with a police officer when he tried to walk into Wal-Mart with an AR – 15 strapped to his back. “It’s as simple as that, don’t break the law and you won’t have anything to worry about.”

When asked if riots like the ones in North Carolina could be the Black community’s way of fighting back against a tyrannical system, Mahon – who belongs to a militia – said it’s doubtful.

“When proponents of the second amendment talk about needing guns in case their government turns against them, they’re talking about stuff like Obama trying to take away their guns, or unfair taxes,” explained Mahon, while looking up the sovereign citizen movement on his laptop, “They aren’t talking about fighting systemic racism in law enforcement!”

“I don’t understand why these riots have to be about race, to begin with,” said Mahon. “I mean, white people get shot too, you don’t see us rioting.”

An avid consumer of both Fox News and Breitbart.com, Mahon feels that the mainstream media might be to blame for keeping the concept of racism alive by pointing it out.

“If you tell Black people that racism still exists then yeah, they’re gonna think it still exists,” said Mahon, a birther – who despite Donald Trump’s recent admission that President Obama was in fact born in America, still maintains that Obama is a Kenyan Muslim – “African Americans fall for the liberal race baiting of people like Al Sharpton hook, line, and sinker despite evidence that America is less racist now than it’s ever been…Sean Hannity said so.”

“Not to mention,” continued the supporter of both the #AllLivesMatter and #BlueLivesMatter hashtags, “These Black Lives Matter thugs are out there fanning the flames, telling everyone to wrap pigs in a blanket and make bacon…or something like that.”

At press time, Mahon was carefully wording a Facebook post encouraging his fellow Americans to exercise their Second Amendment rights against Hillary Clinton.