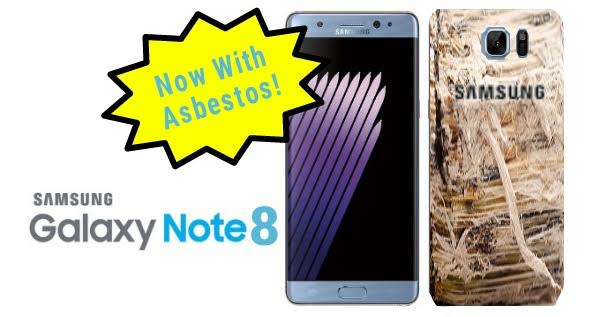 Cellphone giant Samsung has suffered several setbacks this year, not limited to the disastrous Note 7 phone and its tendency to burst into flames. But according to Samsung CEO Gregory Lee, the South Korean company is coming back bigger and better in 2017. Their new platform will launch with the release of the Note 8, which Samsung plans to wrap in asbestos – something Lee hopes will reassure any customers still concerned with device combustion.

“The Note 8 is absolutely, 100% guaranteed to not explode, catch fire, or in any other way become a molten rectangle of searing death” promised Lee. “Thanks to an innovative asbestos shell, customers can text, go on Facebook, and tweet without any fear of the Note 8 overheating or causing third degree burns. Using the phone for calls, however, is strictly at your own risk. Samsung doesn’t recommend holding the Note 8 within six inches of an airway or other facial opening.”

“The Note 8 will come in blue, brown, white, and green, and included with each phone will be a matching air filtration device which Samsung highly recommends that you wear at all times while operating the Note 8″ continued Lee. “We’ve dubbed it the ‘Smart Mask’!”

Lee sincerely hopes that covering the Note 8 in a non-flammable substance will not only drastically lower the chances of a game of ‘Words With Friends’ ending in a series of aggressive skin grafts, but also help to bring back any customers Samsung may have lost thanks to a fear of immolation.

“The idea of burning to death is certainly scary for some people,” admits Lee. “Samsung understands that, and that’s why we made sure that when you use the Note 8, the worst thing that could happen that we are legally obligated to reveal to the public is a little tickle in your throat. That stands as long as you never let the phone touch your bare skin…EVER.”

When asked if making their phones flame retardant – a feature many of their competitors already offer with their phones – would be enough to raise Samsung’s sales back up to their previous heights, the CEO remained optimistic.

“Look, the Note 7 was a more ill-conceived follow-up than The Matrix Reloaded, and we take full ownership of that,” said Lee. “But when the second Matrix movie disappointed everyone, did that stop them from going to see Matrix Revolutions? No, of course not! They showed up on opening day hoping that the last one was just a fluke. That’s what’s gonna happen with the Note 8!”

“Oh and if the asbestos doesn’t sell it for you,” continued Lee, “the Note 8 will also have a headphone jack. Suck it Apple!”